The price of gold extends the advance from the previous week even though the US and France settle on a trade truce, and the precious metal may continue to exhibit a bullish behavior as the Relative Strength Index (RSI) tracks the upward trend from December.

The price of gold retraces the decline from the monthly high ($1611) despite the narrowing threat of a global trade war, and the weakening outlook for the world economy may keep the precious metal afloat as the International Monetary Fund (IMF) trims its growth forecast for 2020.

The IMF warns that downside risks “remain prominent” amid the ongoing shift in US trade policy, with the agency going onto say that “the 2019 global growth estimate and 2020 projection would have been 0.5 percentage point lower in each year without monetary stimulus.”

It remains to be seen if the Federal Reserve will continue to insulate the US economy as French President Emmanuel Macron pledges to work with the Trump administration “on a good agreement to avoid tariff escalation,” and the development may keep the Federal Open Market Committee (FOMC) on the sidelines as “participants regarded the current stance of monetary policy as likely to remain appropriate for a time.” 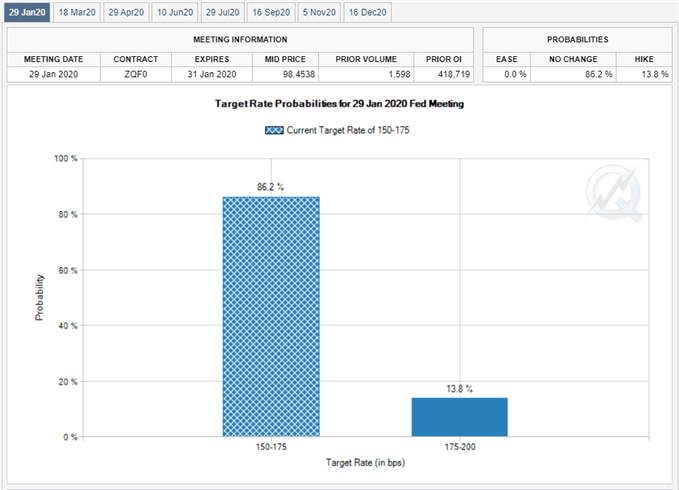 In fact, Fed Fund futures reflect a greater than 80% probability the FOMC will keep the benchmark interest rate in the current threshold of 1.50% to 1.75% on January 29, and the FOMC may largely endorse a wait-and-see approach for monetary policy as “a number of participants observed that the domestic economy was showing resilience in the face of headwinds from global developments.”

However, the FOMC may come under pressure to implement lower interest rates as the Trump administration remains reluctant to rollback tariffs, and Chairman Jerome Powell and Co. may end up adjusting the forward guidance when Fed officials update the Summary of Economic (SEP) at the next quarterly meeting in March amid the weakening outlook for the world economy.

In turn, the weakening outlook for global growth paired with speculation for lower interest may keep gold prices afloat as market participants look for an alternative to fiat-currencies.

With that said, the broader outlook for the price of gold remains constructive, with the reaction to the former-resistance zone around $1447 (38.2% expansion) to $1457 (100% expansion) helping to rule out the threat of a Head-and-Shoulders formation as the region acts as support.