USD/CAD bounces back from a fresh monthly low (1.3115) despite a 0.6% rise in Canada Existing Home Sales, but the opening range for December casts a bearish outlook for the exchange rate amid the failed attempt to test the November high (1.3328).

The recent strength in the Canadian Dollar appears to abating even though the Office of the US Trade Representative attempts to ease concerns surrounding the United States-Mexico-Canada Agreement (USMCA) as Senate Majority Leader Mitch McConnell insists that the “long delay means it can't become law until 2020.”

In response, Bank of Canada (BoC) Governor Stephen Poloz warns that “the near-term risks around productivity growth are tilted to the downside,” and the central bank may adopt a more cautious tone over the coming months as “it looks like the global economy is set for continued slow economic growth.” 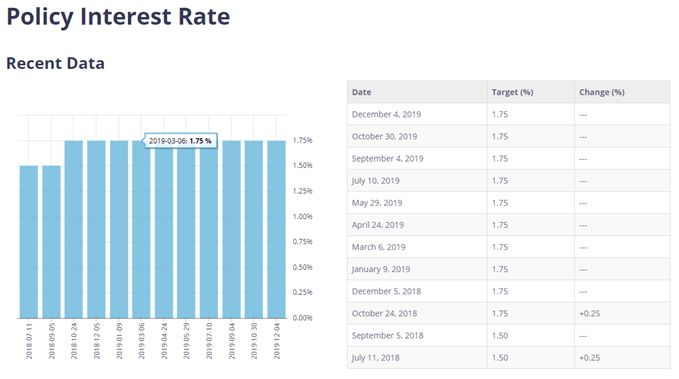 As a result, the BoC may come under pressure to reverse the rate hikes from 2018, and the central bank may start to prepare Canadian households and businesses for lower interest rates as “uncertainty about the future of trade policies and critical institutions like the World Trade Organization is having a more insidious effect.”

However, it seems as though the BoC is in no rush to alter the forward guidance for monetary policy as “Canada’s economy is operating close to capacity,” and the central bank may stick to the same script at the next meeting on January 22 as “future interest rate decisions will be guided by the Bank’s continuing assessment of the adverse impact of trade conflicts against the sources of resilience in the Canadian economy.”

With that said, it remains to be seen if the BoC will follow its major counterparts in 2020, but the wait-and-see approach for monetary policy may keep USD/CAD within the range-bound price action from the third quarter as the Federal Reserve concludes its rate easing cycle.

In turn, the rebound from the October low (1.3042) may continue to unravel as USD/CAD fails to test the November high (1.3328) during the first week of December.