The recent breakout in AUD/USD unravels amid doubts surrounding the US-China trade negotiations, and the exchange rate may continue to give back the advance from the start of the month as it carves a fresh series of lower highs and lows.

AUD/USD continues to pullback from the monthly-high (0.6811) as China’s Foreign Ministry spokesperson,Geng Shuang, provides further details regarding “phase one” of the trade deal and states “Chinese companies independently purchased US agricultural products following market principles and based on domestic demand.”

The comments undermine a recent tweet by President Donald Trump as the Commander in Chief insists that China “will immediately start buying very large quantities of our agricultural product, not wait until the deal is signed over the next 3 or 4 weeks.” 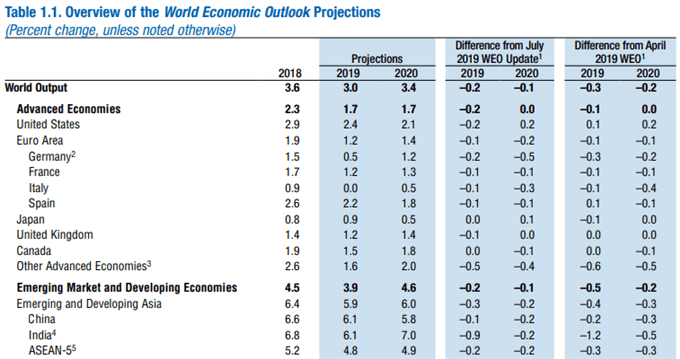 It remains to be seen if the trade negotiation will bear fruit as Chinese officials pledge to retaliate to the US blacklist, and the Australian Dollar may face headwinds ahead of the Asia-Pacific Economic Cooperation (APEC) meetingscheduled for November 15-16 as the International Monetary Fund (IMF) continues to cut its global growth forecast, with China, Australia’s largest trading partner, now projected to grow 6.1% in 2019.

Nevertheless, the Reserve Bank of Australia (RBA) may move the sidelines at the next meeting on November 5 after reducing the official cash rate to a fresh record-low in October, and the central bank may revert to a wait-and-see approach as updates to Australia’s Employment report is expected to show the economy adding 15.0K jobs in September.

However, the RBA Minutes suggest the central bank will retain a dovish forward guidance for monetary policy as “the Bank's most recent forecasts suggested that the unemployment and inflation outcomes over the following couple of years were likely to be short of the Bank's goals.”

In turn, the RBA may retain its pledge “to ease monetary policy further if needed,” and AUD/USD may continue to track the downward trend carried over from 2018 as the central bank keeps the door open to further embark on its rate easing cycle.