The price of gold struggles to retain the advance from the start of the month amid hopes of a looming US-China trade deal, and failure to preserve the monthly opening range may spur a larger correction in the precious metal as the Relative Strength Index (RSI) continues to track the bearish formation carried over from June.

Gold pulls back from last week’s high ($1520) as attention turns to US-China trade talks, and recent headlines indicate the Trump administration is making progress as Fox News reports both parties plan to lay out a timetable to negotiate more difficult issues in 2020.

Signs of a looming trade deal may continue to sap the appeal of gold as it limits the Federal Open Market Committee’s (FOMC) scope to implement lower interest rates, and the central bank may revert to a wait-and-see approach at its next rate decision on October 30 as Chairman Jerome Powell insists that “the future course of monetary policy will depend on how the economy evolves.”

At the same time, Kansas City Fed President Esther George argues that there is “not a compelling justification for providing additional monetary policy accommodation” following the back-to-back rate cuts, with the 2019-voting member on the FOMC going onto say that “the U.S. economy is currently in a good place.” 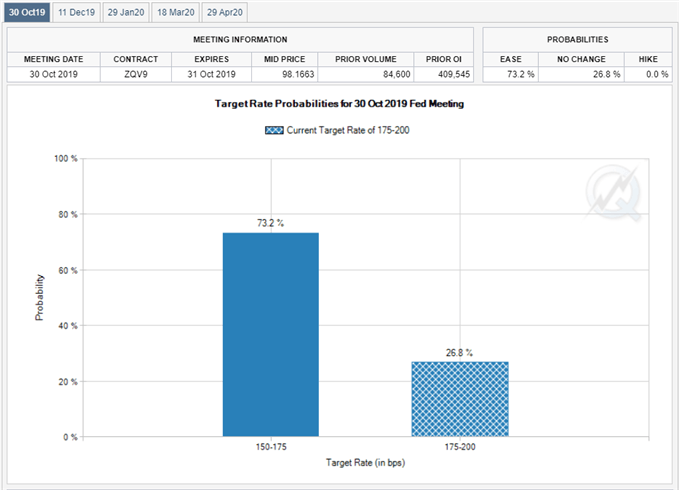 The comments suggest the Federal Reserve is approaching the end of the rate easing cycle as officials see the benchmark interest rate around 1.50% to 1.75% through 2020, but Fed Fund futures continue to reflect expectations for an October rate cut, with the gauge highlighting a greater than 70% probability for a 25bp reduction.

It remains to be seen if the FOMC will continue to reverse the four rate hikes from 2018 amid the divide at the central bank, and signs of a growing dissent may heighten the appeal of gold amid the threat of a policy error.

In turn, falling interest rates along with the inverting US yield curve may push market participants to hedge against fiat-currencies, but the near-term outlook for gold remains mired by a head-and-shoulders formation, with the precious metal still at risk for a larger correction as the Relative Strength Index (RSI) continues to track the bearish formation from June.