USDCAD trades to a fresh yearly-low (1.3055) as the Canadian economy appears to be outperforming its US counterpart, and the exchange rate may continue to exhibit a bearish behavior over the remainder of the week as the Relative Strength Index (RSI) flirts with oversold territory.

USDCAD continues to search for support following the Federal Reserve meeting as fresh data prints coming out of the US indicate a slowing economy, and it seems as though it will only be a matter of time before the Federal Open Market Committee (FOMC) switches gears as the central bank alters the forward guidance for monetary policy.

The fresh updates to the ADP Employment survey does not bode well for the highly anticipated Non-Farm Payrolls (NFP) report as the gauge shows a 102K expansion in private-sector employment versus forecasts for a 140K print in June.

The ISM Non-Manufacturing survey highlights a similar dynamic as the employment component narrows to 55.0 from 58.1 in May, and signs of slower job growth may push the Fed to insulate the economy as “many FOMC participants now see that the case for a somewhat more accommodative policy has strengthened.” 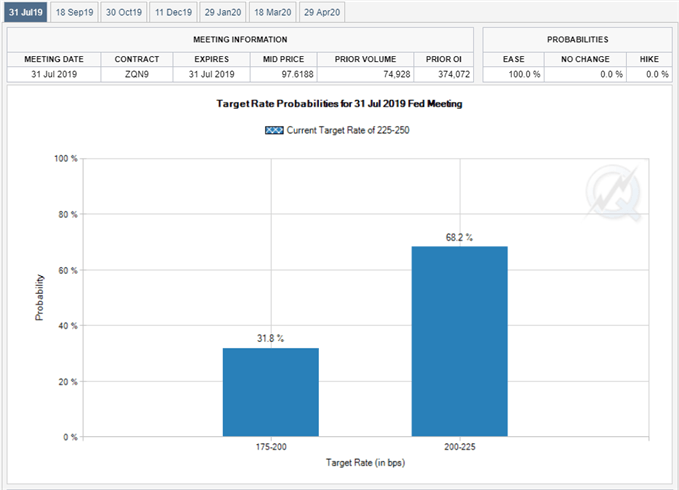 In turn, Fed Fund futures continue to reflect a 100% probability for at least a 25bp reduction on July 31, and Chairman Jerome Powell and Co. may come under pressure to reverse the four rate hikes from 2018 as US President Donald Trump tweets “we need rates cuts, & easing.” 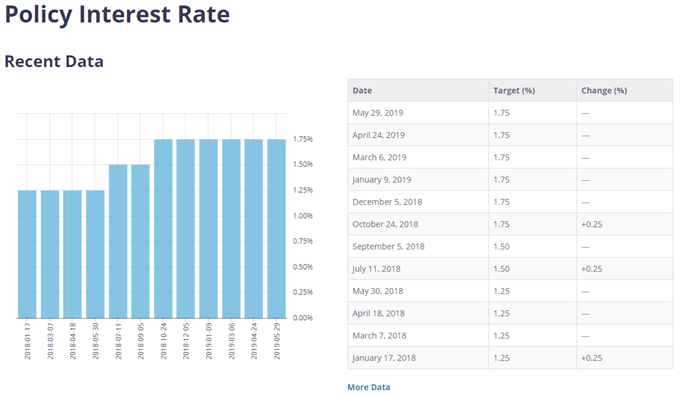 In contrast, the Bank of Canada (BoC) may continue to endorse a wait-and-see approach at the next meeting on July 10 as Canada unexpectedly posts a trade surplus of 0.76B in May, and it seems as though Governor Stephen Poloz and Co. may keep the benchmark interest rate on hold throughout 2019 as “recent data have reinforced Governing Council’s view that the slowdown in late 2018 and early 2019 was temporary.”

As a result, the diverging paths for monetary policy may continue to drag on USDCAD, with the exchange rate at risk of exhibiting a more bearish behavior over the near-term as it snaps the upward trend from earlier this year.