AUD/USD tracks the monthly opening range ahead of the Reserve Bank of Australia’s (RBA) semi-annual Financial Stability Review (FSR), and the aussie-dollar exchange rate may continue to consolidate over the coming days as it appears to be stuck in a wedge/triangle formation. 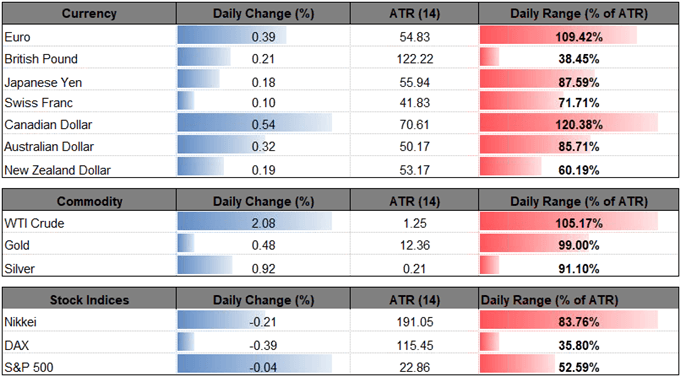 AUD/USD attempts to retrace the decline following the RBA meeting as the U.S. and China, Australia’s largest trading partner, appear to be on track to finalize a trade agreement, but the development may do little to alleviate the downside risks surrounding the Australian economy as the central bank endorse a wait-and-see approach for monetary policy.

Updates to the RBA’s Financial Stability Review (FSR) may produce headwinds for the Australian dollar as the central bank warns that ‘growth has slowed and downside risks have increased,’ and Governor Philip Lowe & Co. may show a greater willingness to insulate the economy as ‘growth in household consumption is being affected by the protracted period of weakness in real household disposable income and the adjustment in housing markets.’

In turn, the RBA may insist that ‘the low level of interest rates is continuing to support the Australian economy’ at the next meeting on May 7, but the central bank may continue to adjust the forward-guidance for monetary policy as officials see ‘scenarios where an increase in the cash rate would be appropriate at some point and other scenarios where a decrease in the cash rate would be appropriate.’

With that said, AUD/USD may continue to consolidate over the near-term as it appears to be stuck in a wedge/triangle formation, with the monthly opening range on the radar as the Relative Strength Index (RSI) highlights a similar dynamic. Sign up and join DailyFX Currency Analyst David Song LIVE for an opportunity to discuss potential trade setups. 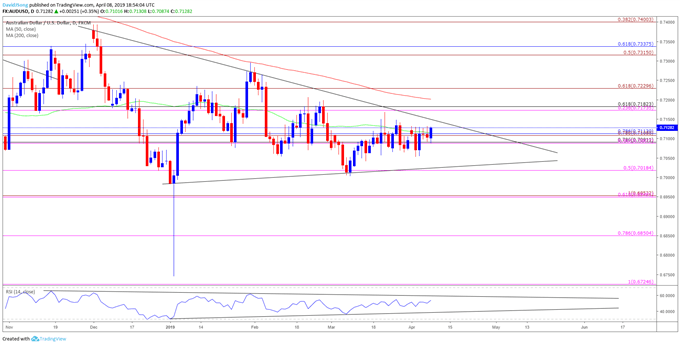