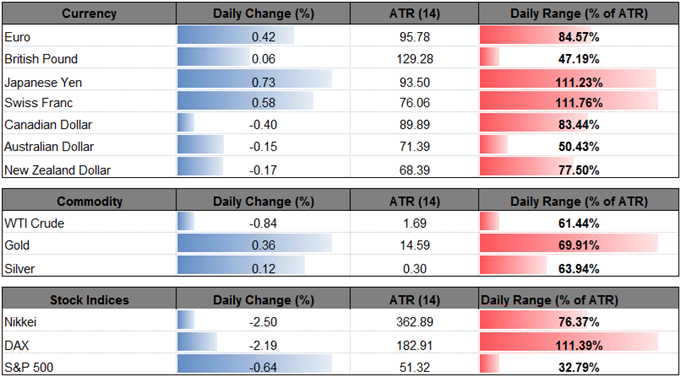 USD/JPY is back under pressure as Bank of Japan (BoJ) Governor Haruhiko Kuroda unexpectedly alters the outlook for monetary policy, with the pair at risk for further losses as a bear-flag formation unfolds.

During the confirmation in front of parliament, Governor Kuroda pointed out that the board will have to think about exiting the Quantitative/Qualitative Easing (QQE) Program with Yield-Curve Control in fiscal 2019 as the BoJ appears to be on track to achieve the 2% inflation-target over the policy horizon. The sudden change suggests the BoJ will deliver a less-dovish statement at the next interest rate decision on March 9, and the broader shift in USD/JPY behavior may continue to take shape over the coming months Governor Kuroda and Co. approach the end of their easing-cycle.

Nevertheless, the key event risks lined up for the first full-week of March may shake up the near-term outlook for USD/JPY as Fed Governor Randal Quarles, New York Fed President William Dudley, Fed Governor Lael Brainard and Atlanta Fed President Raphael Bostic, all 2018-voting members on the Federal Open Market Committee (FOMC), are scheduled to speak ahead of the U.S. Non-Farm Payrolls (NFP) report, and a slew of hawkish rhetoric may help to limit the recent decline in the dollar-yen exchange rate as it boosts bets for four Fed rate-hikes in 2018. 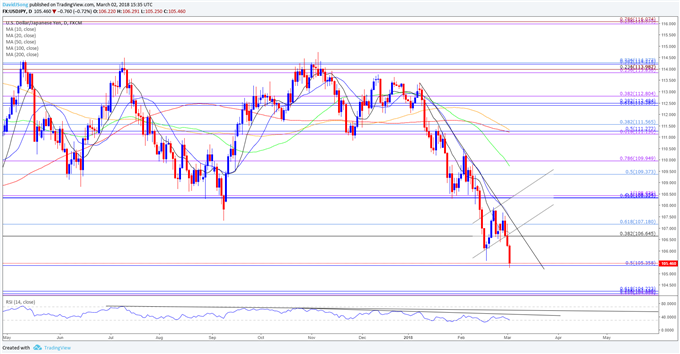 USD/CAD eyes the December-high (1.2920) following the lackluster updates to Canada’s Gross Domestic Product (GDP) report, and the pair may continue to gain ground ahead the Bank of Canada’s (BoC) March 7 meeting as the bullish momentum appears to be gathering pace.

The BoC is likely to reiterate the ‘outlook is expected to warrant higher interest rates over time’ as the economy approaches full-capacity, but Governor Stephen Poloz and Co. may continue to tame expectations for an imminent rate-hike as ‘some continued monetary policy accommodation will likely be needed to keep the economy operating close to potential and inflation on target.’ In turn, more of the same from the BoC may fuel the near-term recovery in USD/CAD as the central bank appears to be in no rush to further normalize monetary policy.

Recent price action suggests the advance from the 2018-low (1.2247) will continue to evolve as the pair extends the lower-highs from earlier this week, and the pair looks poised to test the topside hurdles as Relative Strength Index (RSI) flirts with overbought territory. 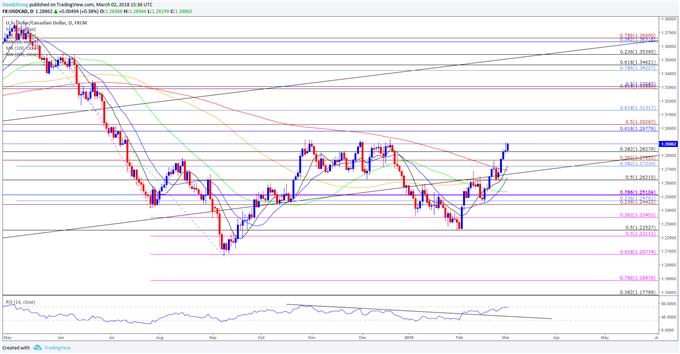 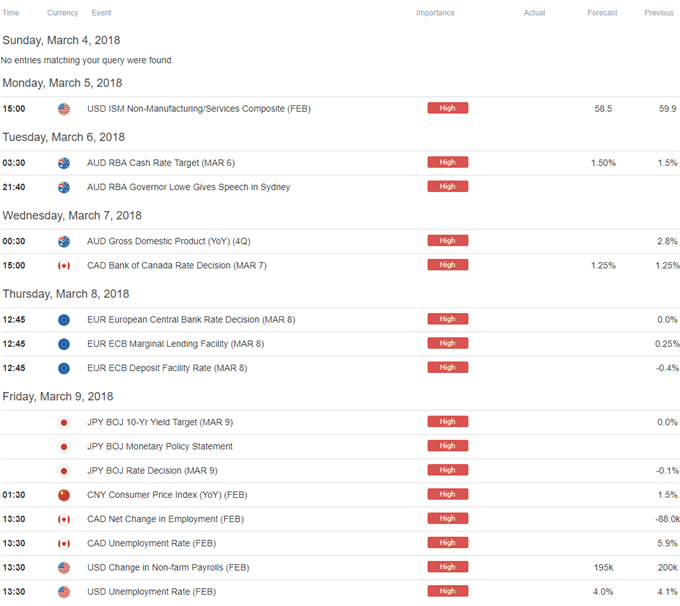