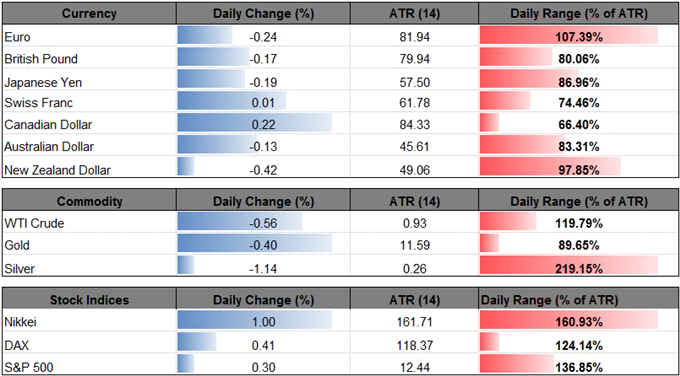 USD/JPY snaps the recent string of lower lows, with the dollar-yen exchange rate at risks of staging a larger recovery should Federal Reserve officials boost expectations for a March rate-hike. 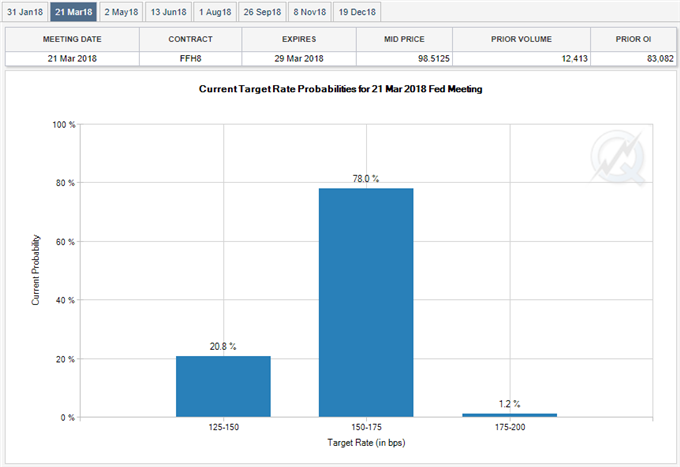 While the Federal Open Market Committee (FOMC) is widely anticipated to retain the current policy at the next interest rate decision on January 31, Fed Fund Futures now highlight a greater than 70% chance for a move in March as the central bank forecasts three rate-hikes for this year. In turn, market participants may pay increased attention to Cleveland Fed President Loretta Mester as the 2018 voting-member is set to speak over the coming days, and growing bets for higher borrowing-costs may fuel the recent rebound in USD/JPY especially as the Bank of Japan (BoJ) continues to embark on its Quantitative/Qualitative Easing (QQE) Program with Yield-Curve Control.

Nevertheless, the break of the descending triangle keeps the broader outlook tilted to the downside especially as USD/JPY clears the November-low (110.84), but the near-term decline in the dollar-yen exchange rate appears to have run its course as the Relative Strength Index (RSI) fails to push into oversold territory. 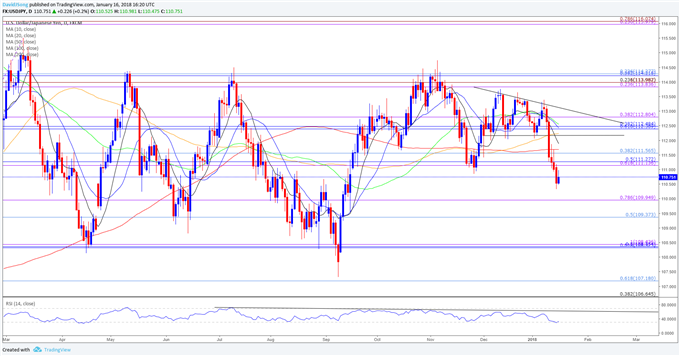 Fresh updates to the Euro-Zone Consumer Price Index (CPI) may do little to derail the near-term advance in EUR/USD as the European Central Bank (ECB) shows a greater willingness to end its quantitative easing (QE) program in 2018.

Even though the final CPI print for December is anticipated to show the headline reading slowing to an annualized 1.4% from 1.5% the month prior, ECB officials appear to be laying out a more detailed exit-strategy as the economic recovery in the euro-area moves into ‘expansionary territory.’ In a recent interview, Governing Council member Ardo Hansson noted that it wouldbe ‘appropriate to end the purchases after September’ as long as the euro-area broadly tracks the ECB’s latest forecast, and went onto say that the QE program ‘can go to zero in one step without any problems’ as the central bank alters the forward guidance for monetary policy.

With more ECB officials scheduled to speak over the coming days, a batch of hawkish rhetoric may keep the Euro afloat ahead of the first 2018 meeting on January 25 especially as the Governing Council appears to be on track to further reduce the QE program over the coming months. Keep in mind, recent price action in EUR/USD warns of a near-term pullback as the pair holds within the previous day’s range , while the Relative Strength Index (RSI) appears to be coming off of overbought territory. Want to know what other currency pairs the DailyFX team is watching? Download and review the Top Trading Opportunities for 2018. 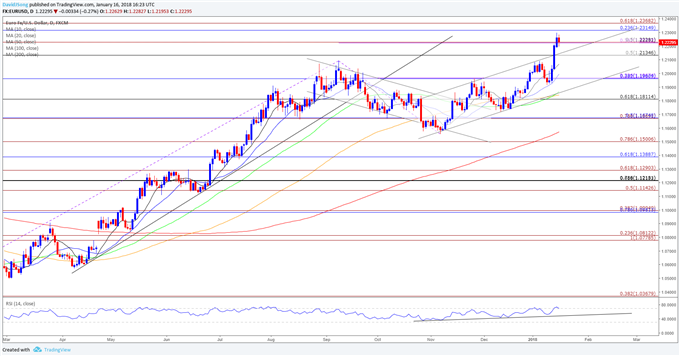