The broader outlook for EUR/USD remains constructive following the appreciation in 2017, with the euro-dollar exchange rate at risk of extending the advance from late last year as it snaps the recent string of lower highs & lows.

Keep in mind, the failed attempt to break the September-high (1.2092) warrants attention as it starts to look like a double-top, but the euro-dollar exchange rate may continue to exhibit a bullish behavior in 2018 as the European Central Bank (ECB) starts to wind down its quantitative easing (QE) program. With the asset purchases set to expire in September, President Mario Draghi and Co. are likely to prepare European households and businesses for a less accommodative stance, and the account of the December monetary policy meeting may heighten the appeal of the Euro should the central bank reveal a more detailed exit strategy.

At the same time, there appears to be a growing rift within the Federal Reserve as Atlanta Fed President Raphael Bostic, a 2018 voting-member on the Federal Open Market Committee (FOMC), strikes a cautious tone and favors a ‘slow removal of policy accommodation,’ while San Francisco Fed President Eric Rosengren argues that the central bank ‘should be focused on an inflation range’ as price growth continues to run below the 2% target. In turn, the FOMC may merely try to buy time at its next interest rate decision on January 31, with the U.S. dollar at risk of facing a more bearish fate over the coming days should a growing number of Fed officials warn ‘inflation might stay below the objective for longer than they currently expected.’ Interested in having a broader discussion on current market themes? Sign up and join DailyFX Currency Analyst David Song LIVE for an opportunity to discuss potential trade setups! 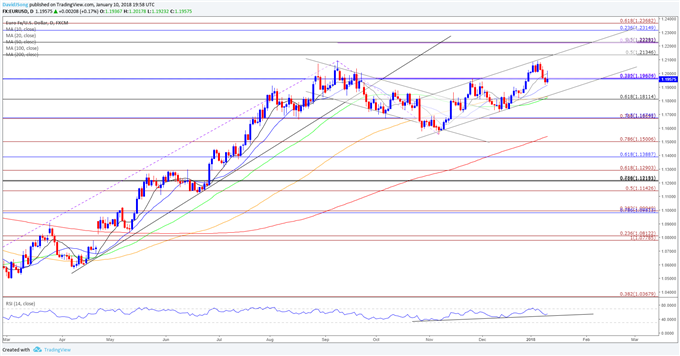 Near-term outlook for EUR/USD remains mired by the failed attempt to clear the September-high (1.2092), but the rebound from the November-low (1.1554) may ultimately develop into a larger rally as both price and the Relative Strength Index (RSI) preserve the bullish formations carried over from the previous year. With that said, topside targets will come back on the radar once the euro-dollar exchange rate is able to close back above the 1.1960 (38.2% retracement) region, with the first hurdle coming in around 1.2130 (50% retracement) followed by the 1.2230 (50% retracement) region.Want to learn more about popular trading indicators and tools such as the RSI? Download and review the FREE DailyFX Advanced trading guides !