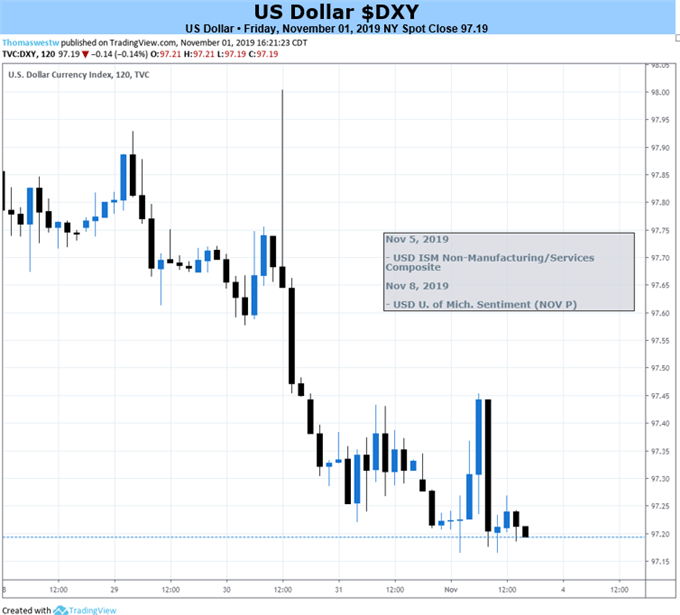 US Dollar - Sideways to Lower Until Trade War Confusion Clears

The US dollar continues to be steered by US-China headlines and further calls from US President Trump for lower interest rates, a potentially volatile pair of drivers. Earlier this week the scheduled US-China meeting at the APEC trade summit later this month was cancelled due to ongoing riots in host country Chile, leaving the market in the dark when or if the meeting between the two superpowers will be rescheduled. US President Trump recently tweeted that China will soon be signing phase one of the trade agreement, although China seemed to be wary of President Trump’s enthusiasm, leaving the market suitably bemused.

President Trump’s Twitter account was busy this week post Wednesday’s FOMC meeting where the Fed cut interest rates by another 25 basis points, the third cut this year. Trump continued his attack on the Fed by tweeting, “The Fed has called it wrong from the beginning, too fast, too slow. They even tightened in the beginning. Others are running circles around them and laughing all the way to the bank”, before adding that “China is not our problem, the Federal Reserve is!”

At the FOMC meeting Fed chair Jerome Powell indicated that further rate cuts would be data dependent - prompting Trump’s tweet - and the markets are now pricing in a 50/50 chance of a cut in January, with a 25-basis point cut fully priced-in at the July meeting. US data releases have been weak of late and while this week’s Q3 GDP release showed growth at reasonably robust pace of 1.9%, due to continued consumer spending, business investment declined due to trade war uncertainty. Third quarter US growth in 2018 was 3.4%.

All this continued uncertainty leaves the US dollar vulnerable and likely to fade lower. The recent three-month US dollar basket low, made on October 21, is under threat and a break and close below here could see further losses accrue. 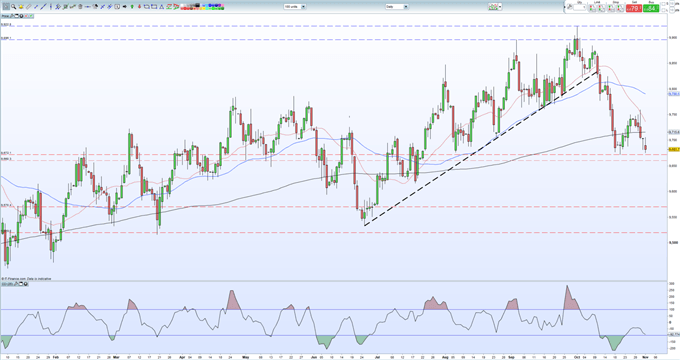 There are a handful of important US data releases next week, including ISM non-manufacturing and services and the Uni of Michigan sentiment reading at the end of the week. For a full rundown of all market moving economic data and events please see the DailyFX Calendar

IG Client Sentiment shows that how traders are positioned in a wide range of assets and markets.

What is your view on the US Dollar (USD) – bullish or bearish?? You can let us know via the form at the end of this piece or you can contact the author at nicholas.cawley@ig.com or via Twitter @nickcawley1.