These two developments helped fuel a massive influx of US Dollar strength across the board of major currency pairs. USD/JPY and USD/CAD surged while EUR/USD, GBP/USD, and AUD/USD snapped sharply lower. As such, we saw the biggest one-week rally by the broader DXY Index since March 2020. Precious metals plunged sharply due to the increased threat of an expedited Fed taper timeline with gold price action tumbling -5.88% to trade back in the red year-to-date.

MAJOR CURRENCIES AND GOLD PERFORMANCE AGAINST US DOLLAR 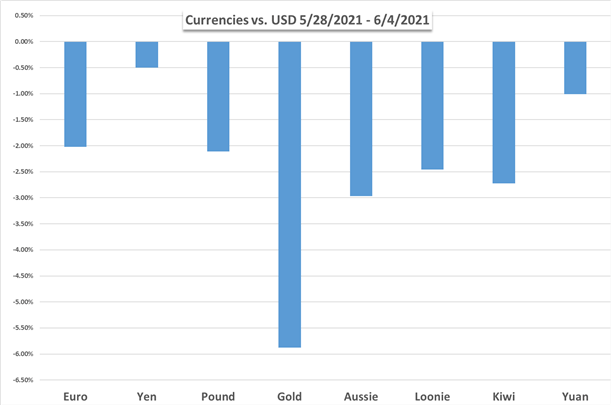 Speculative risk appetite also deteriorated notably judging by the drop-off in demand for major cryptocurrencies like Bitcoin and Ethereum. Since the latest Fed announcement, BTC/USD price action has fallen -15.55% while ETH/USD has declined -17.34%. As for major stock indices, the S&P 500 Index notched its worst week of losses since 22 February after falling -1.91% on balance.

Looking to the week ahead on the DailyFX Economic Calendar, we see that the release of monthly PMI data is scheduled for release. Markets are also scheduled to receive another reading on US inflation. The Fed’s preferred gauge of inflation, core PCE, is due to cross wires on Friday, 25 June at 12:30 GMT. These high-impact data releases stand to weigh on broader market sentiment due to their potential to further sway the threat of Fed tapering.

That said, often dovish-leaning Fed Chair Jerome Powell and NY Fed President John Williams might undermine recent US Dollar strength by talking down taper risks during their scheduled speeches next week. Elsewhere, the Bank of England is due to provide markets with an interest rate decision on Thursday, 24 June at 11:00 GMT. This could contribute to more volatility for the Pound-Dollar. Banxico is scheduled to release an interest rate decision of its own next Thursday at 18:00 GMT. What else is in store for markets during the week ahead?

US Dollar Outlook: A hawkish Fed Pivot – Is the USD Rally Transitory?

A short-term ascending channel is under threat after Bitcoin’s first attempt to break through a stubborn resistance zone failed.

Although the Fed hawkish bias has caused some reflationary position unwinding and anxiety about the outlook for commodities, the fundamental picture for oil has not changed and remains bullish.

Last week’s updated Federal Reserve dot plot, suggesting two US interest rate increases in 2023, could be a game-changer for EUR/USD. Strategically, a long-term trend lower may have now begun.

British Pound Outlook: GBP/USD Clears May Low Ahead of BoE

The Bank of England (BoE) interest rate decision may do little to sway GBP/USD as the central bank is widely expected to retain the current course for monetary policy.

Australian Dollar Outlook: Hard Fight Ahead Against FOMC-Charged US Dollar

The Australian Dollar sank against the US Dollar After FOMC sent a hawkish policy signal. AUD/USD Faces a New Headwind in a charged US Dollar.

The big gold sell-off quickly has an important long-term trend test in play; scenarios to consider from both sides of the tape.

It was a brutal week for the British Pound against the US Dollar and Japanese Yen, but it remains to be seen whether this can lead into fresh long-term trends.

Canadian Dollar is under siege after the FOMC fueled massive a USD/CAD reversal off key technical support. The technical levels that matter on the Loonie weekly chart.