USD/MXN has seen some important downside correction this week and is now sitting on the 20.00 mark. Despite the US Dollar’s relative strength on Friday, the pair has trended downwards for most of the week and has managed to break below the descending trendline after a push higher in the US Dollar saw USD/MXN break the tight range of the last month.

On Thursday we saw Banxico – Mexico’s Central Bank - lower rates by 25 basis points as expected, after the benchmark had been left unchanged at the previous meeting. This takes the rate to 4%, eroding the carry trade value of the Mexican Peso, in an attempt to incentivize the economy after its worst year since the Great Depression.

The country still faces significant risks with regards to Covid-19, as infection and death rates continue to be high and the vaccine rollout is facing significant delays, meaning that less than 1% of Mexico’s population has received a dosage. 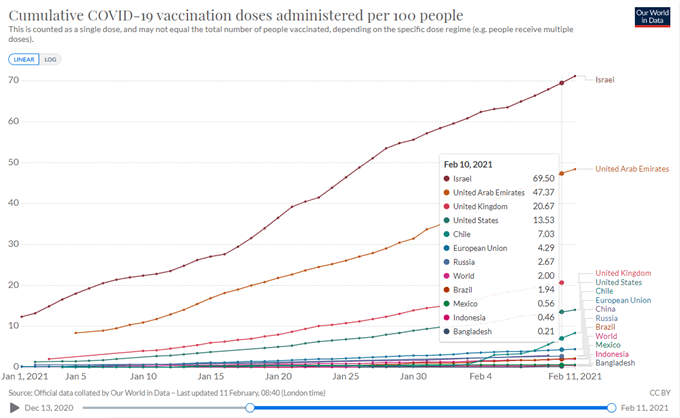 The newest rate cut suggests the central bank has taken on a dovish stance, meaning more rate cuts could come in the first half of the year. The decision came as inflation figures for the month of January showed CPI was higher than expected, although still within the target set by the bank of 3% +/- 1 percentage point, as the board is looking to balance inflationary pressures with further easing.

There is no data scheduled this coming week for Mexico so USD/MXN is likely to move in line with overall market sentiment, which has recently been skewed to the upside but with faltering momentum. Equities continue on a positive note as vaccine rollout and economic data are good, but not too good to encourage fiscal and monetary policymakers to step back, keeping markets supported in the short-term. The US Dollar has been fluctuating lately as a significant rebound at the beginning of February lost steam and the currency is now hovering above recent lows. It will be key to see if risk appetite suffers any further deterioration in the short-term, as USD/MXN is largely exposed to changes in sentiment and this could drive the pair higher.

Looking at the weekly chart, momentum indicators suggest there is further room for upside momentum before a correction is overdue, so I wouldn’t be surprised if USD/MXN breaks above the upper descending trendline again. If so, watch out for this year’s high at 20.60, as a break above this level would signal a reversal in price with further bullish momentum expected. To the downside, 19.87 is likely to remain as firm support, followed by the 200-week SMA at 19.68, at which point sellers are likely to regain control of the pair.