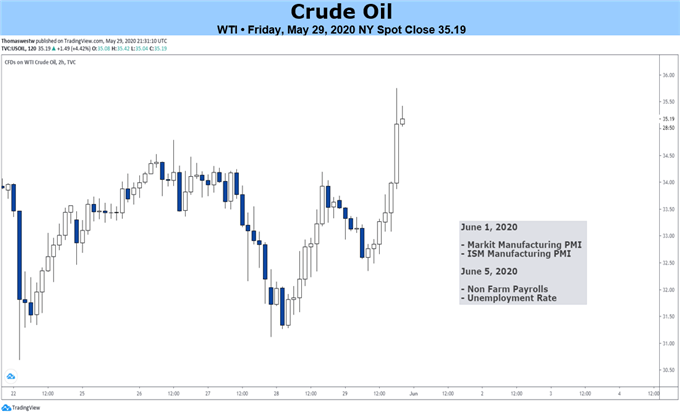 The price of oil consolidates after clearing the April high ($29.13), but the ongoing contraction in US production may keep crude prices afloat even though the Organization of the Petroleum Exporting Countries (OPEC) continue to highlight the “surge in tanker demand, driven by low crude prices and a need to push out excess supplies amid concerns about the availability of onshore storage capacity.”

The price of oil holds near the May high ($34.81) despite an unexpected rise in US crude inventories, and the response by oil producers may continue to stabilize the energy market as US output falls to its lowest level since October 2018.

US crude inventories jumped 7928K in the week ending May 22 after contracting 4982K the week prior, and the slowdown in energy consumption looks poised to persist as OPEC’s Monthly Oil Market Report (MOMR) states that “in 2020, world oil demand growth isadjusted lower by 2.23 mb/d and is now forecast to drop by 9.07 mb/d.” 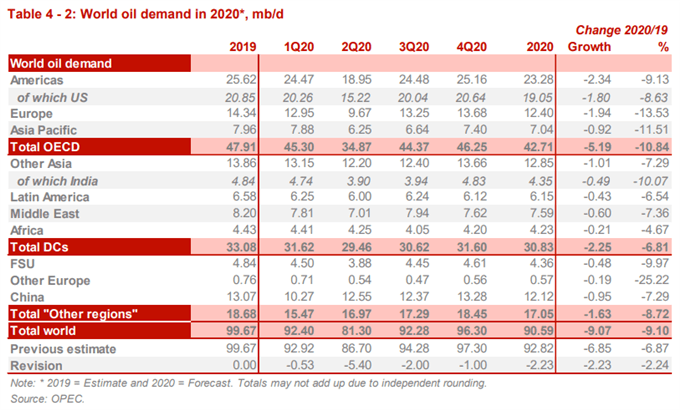 The update argues that “the worst contraction in majoroil demand centers around the world is expected to take place in the 2Q20,” but the economic shock from COVID-19 may continue to drag on energy consumption as the global travel ban remain in place, while “industrial fuelsare also forecast to face pressure in response to reduced manufacturing activity compared with last year.”

In turn, OPEC and its allies may show a greater wiliness to extend the extraordinary measures taken in April as the group pledged to reduce oil output by 9.7 mb/d in May and June, and the ongoing contraction in supply may keep oil prices afloat amid the ongoing decline in US production.

Recent figures from the US Energy Information Administration (EIA) showed field production narrowing to 11,400K from 11,500K in the week ending May 15 after hitting a record high (13,100K) earlier this year, and the decline in crude output looks poised to persist as Reuters reveals that Chevron, the second largest oil producer in the US, plans to cut up to 15% of its global workforce.

With that said, the ongoing slowdown in global production is likely to keep the price of oil afloat in June, but the gradual process of reopening the advanced economies may rattle crude prices amid the threat of a protracted recovery.