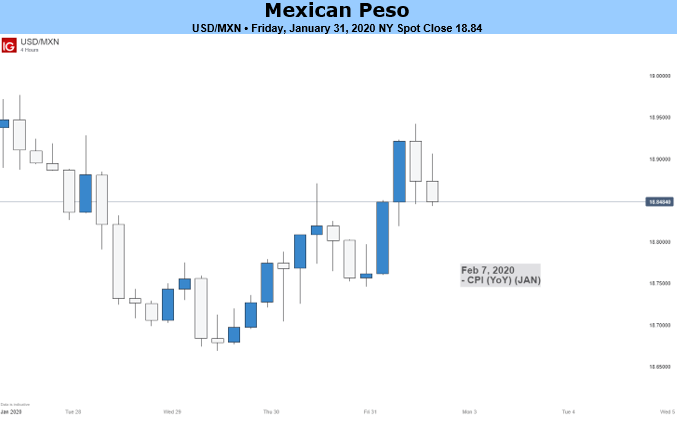 There is no doubt the Mexican Peso has been the outstanding emerging markets currency in the last few months, appreciating 5% since the end of November against the US dollar alone. If we look at its performance against the Euro, it’s continued strength coupled with euro weakness has seen EUR/MXN hit lows last seen July 2017.

What is Behind this Recent Strength in the Mexican Currency?

Well if you look at solid economic data, the Mexican economy hasn’t been performing well. Data for the last two months has shown that inflation is stagnating, retail sales are falling and economy activity is slowing. But like most emerging market currencies, the Mexican Peso enjoys a push when risk appetite is at a high.

The effect of this risk-driven demand is evident if we look at the performance of USD/MXN in recent days, when an outbreak of coronavirus spooked investors and money fled from risky assets towards risk havens like gold and the US dollar. As the risks of the virus spreading became an increasing worry across the world at the beginning of this week, USD/MXN halted its decline and has manage to recover 1% of its value, after rallying as much as 1.72% when measured at the height of the risk-aversion sentiment on Monday.

But before the world was concerned about a world virus outbreak, markets were enjoying some much needed calm after ongoing trade wars between China and the US, Brexit concerns, and a spike in geopolitical tensions in the Middle East kept markets highly volatile throughout most of 2019. This period of market stability allowed riskier assests like the Mexican Peso to gain some ground, but it’s recent strength has also been influenced by a series of fundamental factors:

3 Key Factors that have Boosted the Mexican Peso:

Despite its stellar performance since the end of 2019, the long-term outlook for the Mexican Peso is neutral to dovish, given its lack of long-term sustainability. In the shorter-term, demand is likely to be driven by risk events, with focus on the development of the coronavirus and its effect on US dollar safehaven demand.

As mentioned before, the economic data for Mexico is not particularly great and given its softening inflation, Banxico, Mexico’s Central Bank, will likely need to cut rates further in 2020, which will diminish the currency’s carry trade diferential, one of its most sought after traits. On top of that, the central bank mentioned at its lastest policy meeting that economic activity is weakening and growth remains stagnant, putting further pressure on the Mexican Peso. Special focus on CPI and GDP data to be released in the following weeks to gauge the Central Bank’s future stance on monetary policy.

It is also important to remember that demand driven by risk appetite is volatile and not sustainable in the long-term, especially when it is not supported by fundametals and economic data. Therefore, we may see Mexican Peso weakness continuing in the short-term.