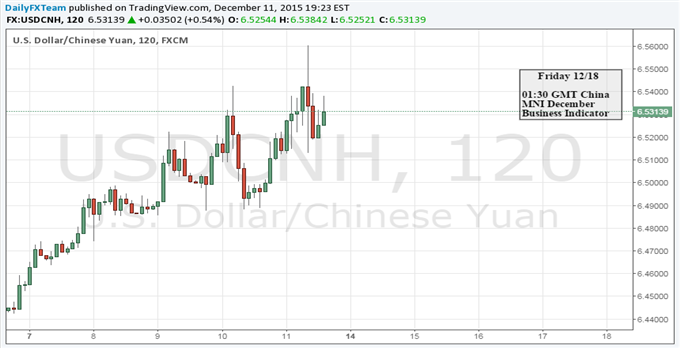 - What Are the Traits of Successful Traders? Get FXCM’s Free New eGuide

The Chinese Yuan offshore exchange rate (USD/CNH) broke ¥6.55 on Friday as the onshore rate (USD/CNY) dropped to the lowest level in four and half years. The PBOC is continuing to gradually guide its currency lower in both onshore and offshore markets to prepare for the turbulence of Fed rate hike in the coming week. On December 11, the PBOC announced a new Yuan index, signaling its intention to loosen the Chinese Yuan’s peg to the US Dollar while letting the Yuan refer to a broader range of currencies (what’s being referred to as a “RMB basket reweighting). As a result, the Fed rate decision and further changes in the PBOC’s tone will be the key factors for Chinese Yuan rates over the coming week.

Market expectations for a Fed rate hike have already pushed down the Chinese Yuan versus the US Dollar, intensifying the impact of increasing capital outflows from China. China’s foreign reserve data in November fell to the lowest level in over two years, to $3.44 trillion. In order to deal with capital outflows, the PBOC on one hand has already tightened the controls on capital outflows such by temporarily shutting down channels for Chinese institutions to invest overseas. On the other hand, the PBOC has carried out stress tests on Chinese Yuan exchange rates by guiding it lower versus the US Dollar to see how the market would react before the actual Fed decision comes.

Once the expected Fed rate hike becomes reality, even though the market has already likely priced in the rate hike, the Chinese Yuan is likely to continue to be devalued, as more capital flows out from China seeking better returns. Chinese regulators may adjust the speed of capital outflow by turning down the capital tap, but truly it is no longer able to fully shut it off as China is already on the one-way road to opening up its capital markets and liberalize its currency. Over-regulation of capital flows and Chinese Yuan exchange rates during the transition period will likely lead to international criticism, which may be too heavy for China to bear at the moment especially after its currency was just accepted as part of the IMF’s SDR reserve currency basket.

As a result, in the coming week, we expect yuan’s continued depreciation, mainly driven by the Fed rate hike. However, the central bank of China will determine the degree of the devaluation and thus it is not likely to be considered a ‘catastrophic’ drop like what we saw in August 2015. - RM