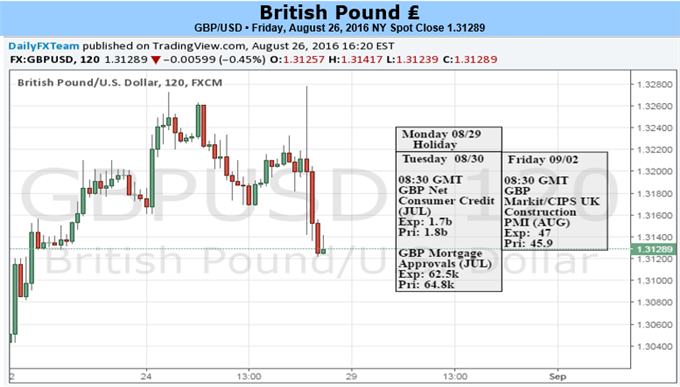 The key developments coming out of the U.K./U.S. next week may spur further losses for GBP/USD as the Bank of England (BoE) remains poised to further embark on its reestablished easing-cycle, while Federal Reserve officials talk up expectations for a 2016 rate-hike.

With U.K. Mortgage Applications projected to narrow in July, the British Pound stands at risk of facing near-term headwinds especially as the Monetary Policy Committee (MPC) keeps the door open to implement fresh record-low interest rates over the coming months. Indeed, data prints highlighting the risk for an imminent recession may prompt the BoE to implement more non-standard measures in 2016, but it seems as though Governor Mark Carney will continue to rule out a zero/negative interest-rate policy for the U.K. as Deputy Governor Minouche Shafik argues the central bank is ‘acutely aware’ of the lower bounds for policy rates. With that said, the sterling may continue to give back the advance from the monthly low (1.2864) amid the failed attempt to test the August opening-range, but the pair may ultimately face range-bound conditions on a longer-term horizon as market participants weigh the boundaries for monetary policy.

In contrast, the fresh batch of central bank rhetoric emerging from the Fed Economic Symposium in Jackson Hole, Wyoming appear to have nudged interest-rate expectations higher as Fed Funds Futures now reflect a 45% probability for a rate-hike by December, and the dollar may try to stage a larger advance in the week ahead should the key data prints coming out of the U.S. economy put increased pressure on the committee to raise the benchmark interest rate sooner rather than later. With U.S. Non-Farm Payrolls (NFP) anticipated increasing another 185K in August, a positive development may boost the appeal of the greenback especially as ‘Chair Janet Yellen warns ‘the case for an increase in the federal funds rate has strengthened in recent months, and comments from Boston Fed President Eric Rosengren, Minneapolis Fed President Neel Kashkari, Cleveland Fed Loretta Mester and Richmond Fed President Jeffrey Lacker may largely reinforce a more hawkish tilt for the policy outlook as the U.S. economy approaches ‘full-employment.’ 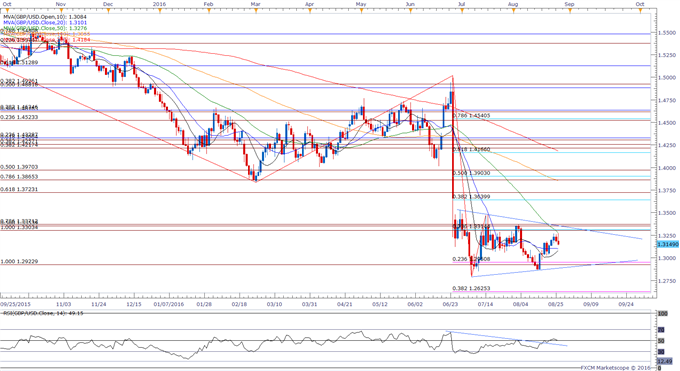 In turn, GBP/USD may work its way back towards the lower bounds of the wedge/triangle formation carried over from late-June especially as the pair turns around ahead of the August opening-range, but the pair may continue to face a narrowing range going into September as market participants weigh the diverging paths for monetary policy.