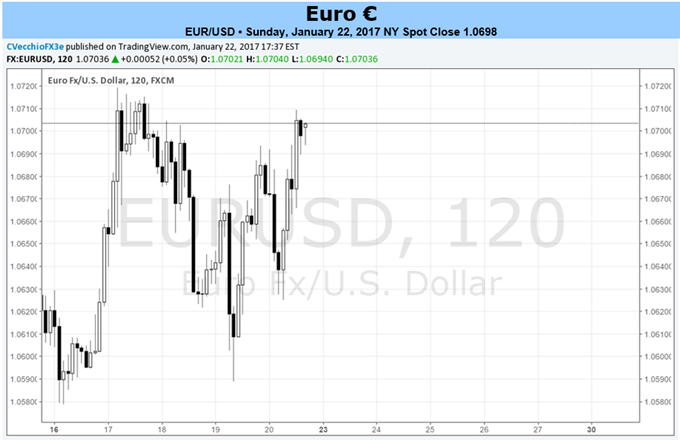 - Draghi’s dovish tilt offset in EUR/USD by uncertainty surrounding the early days of the Trump administration.

The Euro swung between gains and losses against most of its major currencies (save the Canadian Dollar) at the end of the week, dragged along by competing policymakers on both sides of the Atlantic. The European Central Bank outlined a dovish point of view to its policy approach in the early part of the year, while a lack of clear policy approach by new US President Donald Trump’s administration with respect to the US Dollar kept EUR/USD on edge throughout the week.

The ECB outlined a fairly dovish perspective on Thursday, highlighted by President Draghi’s attitude towards inflation: “we’re looking through [it].” As we’ve covered in previous iterations of this weekly piece, inflation expectations have been edging higher in the Euro-Zone over the past two months, thanks in part to rising yields globally and boosted Brent Oil prices. In a sense, the data has been at odds with the ECB’s assessment. ECB President Draghi will have a chance to further explain the Governing Council’s view during his speech on Monday.

In the coming week, data out of the Euro-Zone is expected to show further improvement for growth prospects, which may make the ECB’s goal of keeping the Euro weak versus its major trading partners more difficult. On Monday, the preliminary January Euro-Zone Confidence reading is due to improve to -4.8 from -5.1. The aggregate collection of PMIs from across the Euro-Zone on Tuesday are expected to culminate in the initial Euro-Zone Composite PMI for January edging higher to 54.5 from 54.4 – an indication for a quarterly growth rate around +0.4% or +0.5%.

While that data aren’t expected to be great, they will show signs of further slow-but-steady improvement in the Euro-Zone’s growth prospects. Yet given the Governing Council’s point of view, it seems that all that will result will be the ECB keeping policy on hold for the foreseeable future (three- to six-months), with the only adjustment likely being to the timeline of the QE program (extending the length of its QE program but reducing the pace of purchases). Any such announcement would come at a meeting with a new set of SEPs, which come in March, June, September, and December.