Japanese Yen Caught Out on Fed Hawkishness and Omicron. Will USD/JPY Break?

The Japanese Yen came under pressure as higher yields offshore and the impacts of omicron weighed. There is some confusion around the travel restrictions being implemented in Japan. Some flights will now be allowed in, but others will not be, creating heightened uncertainty.

The Norwegian Krone also underperformed as crude oil prices continue to languish ahead of the OPEC+ meeting today. There is speculation that OPEC+ could cut output in light of the omicron variant impacting demand.

If there was any doubt about the Tuesday bombshell from Federal Reserve Chair Jerome Powell, it was re-iterated overnight. The market was left in doubt that the timeline has been bought forward on the pace of tapering asset purchases and rate hike lift off.

This was further backed up by Federal Reserve Bank of Cleveland’s President Loretta Mester. She said in an interview with Bloomberg that the data supports bringing forward the pace of tapering and could see the program finished by the end of the first quarter or early in the second quarter of 2022.

The Fed have previously made it clear that rate hikes will not happen until asset purchases are over. This brings forward the first potential rate hike.

The S&P 500 had its’ worst 2-day run since October last year in the aftermath of increasing hawkishness from the Fed. However, US futures are currently pointing toward a positive start to the US session.

APAC equities ignored the negative lead from Wall Street and had a mixed day with subdued movement. Japanese indices were a bit softer while Hong Kong and China has small gains.

Korea’s Kospi index was the best performer after GDP figure printed in-line with expectations of 4% for the year at the end of the third quarter. However, South Korean CPI came in much stronger than forecasts for the month of November at 0.4% against -0.2% anticipated.

Gold was a touch softer near 1777 in the Asian session, while US 10-year Treasury yields recovered to get above 1.44%.

Looking ahead, there will be US initial jobless claims data released and a number of Fed speakers will be hitting the wires.

USD/JPY has paused in the last few session after a sell-off to end last week.

It is currently below the short-term simple moving average (SMA) and above the long-term SMAs. The price is currently near the medium-term 55-day SMA.

This might indicate that short-term bearish momentum is running up against bullish long-term momentum. A significant break-out of the near-term range of 112.533 – 113.960 could see momentum evolve in that direction. 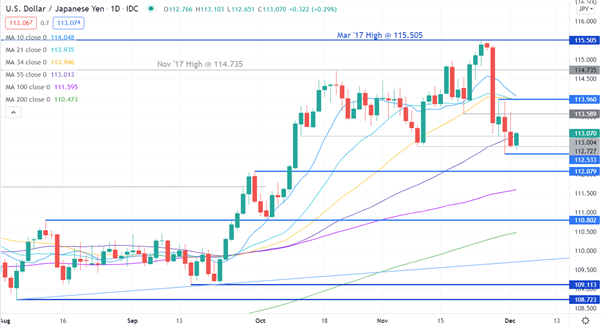