Japanese Yen Hit by Crude Oil, US Dollar and US Yields Impacts. Where to for USD/JPY?

The Japanese Yen managed to pull back from a 4-year low against the US Dollar today. Although crude oil continued higher, US Treasury yields pulled back. 10-years retreated to 1.63% from a high above 1.68% in the US session. Then a strong local PMI came out, printing at 54.2 against a prior print of 53.2, further boosting the Yen.

However, Japanese stocks have taken a hit today with the Nikkei 225 index down over 1.5%. Other APAC equity indices were mixed without too much movement.

WTI crude continues to gain ground as the volume of oil to be released from strategic reserves appears to be below market expectations. China, India, Japan, South Korea, UK and the US have all indicated a willingness to tap into strategic reserve stockpiles.

Market commentators have described the contribution as a drop in the ocean. Additionally, most of the oil will be swapped rather than sold, limiting the impact of lowering prices.

OPEC+ meet Thursday next week to consider their output volume. WTI traded at US$ 79.00 a barrel against a low of US$ 74.76 on Monday.

The RBNZ delivered on mainstream expectations, raising rates by 25 basis points (bp). Some market observers thought that they might hike by 50 bp. Consequently, NZD/USD went into a tailspin, initially spiking to 0.6958 before crashing under 0.6900 in the afternoon.

The RBNZ said that it expected the cash rate to be at 2% by the end 2022 as Governor Orr vowed to rein in inflation. New Zealand 10-year government bond yields eased to 2.532%, 5.5 bp lower.

The Australian Dollar was the other notable G-10 currency mover, as it was dragged down by the Kiwi move.

Looking ahead, it is a huge day for data out of the US in the lead up to the Thanksgiving holiday. Aside from GDP and the FOMC meeting minutes on the main stage, we will see performances from mortgages, jobs, inventories, durable goods, core PCE, sentiment and personal income and spending.

USD/JPY made a 4-year high against before easing a touch today. The March 2021 high of 115.505 is now in view as a potential resistance level. 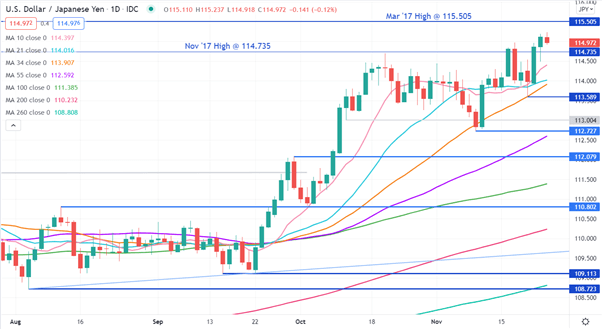