Crude Oil Tanks on Speculation of Supply From the US and Japan. Will WTI Continue to Break Support?

Crude oil went aggressively south on Friday and WTI has traded below US$ 75 a barrel in Asian trade today.

Japanese media are reporting that there is a possible Japan-US joint statement being prepared for an announcement in the coming days about the release of strategic petroleum reserves. China is also believed to be considering such a move.

China’s PBOC left the 1 and 5-year loan prime rate unchanged at 3.85% and 4.65% respectively. There had been commentary around a possible easing.

Currencies opened the week with AUD and NZD outperforming, while EUR, GBP, CHF and JPY weakened.The Euro has become vulnerable due to Covid restrictions rising again.

On Friday, the USD index (DXY) moved up toward the recent high and has held those levels today. The ‘big dollar’ was aided by Fed speakers Bullard, Clarida and Waller voicing hawkish views on the pace of tapering.

APAC equities were mixed in the Asian session with Korea’s Kospi index the best of the bunch, rising over 1.5% at one stage after solid trade data.

The market is awaiting a decision from US President Joe Biden on who will be the next leader of the Federal Reserve Bank. The race is between the incumbent, Jerome Powell and Governor Lael Brainard.

The White House has previously indicated that a decision will be made before the Thanksgiving holiday this Thursday. The President is due to deliver a speech on Tuesday on the economy and inflation. Speculation is rife that an announcement will be made then.

Later today, there will some home sales data from the US and a number of ECB speakers will be hitting the wires.

On Friday and again on Monday, it bounced off a previous low at 74.96 that could continue to provide support. Further down there might be support at the pivot points of 73.14 and a previous low at 69.39. The latter currently coincides with the 200-day SMA. 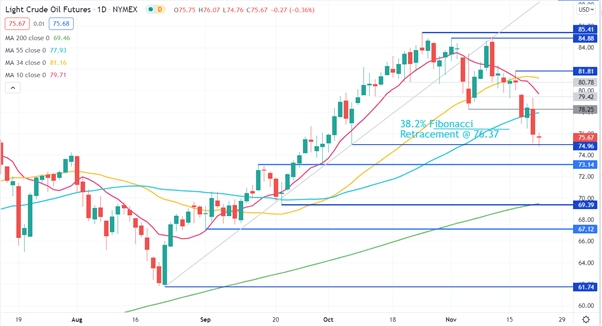