ASX 200 Drops as RBA Ditches Yield Target Before BoE and the Fed. Where To for Australian Stocks?

The RBA will no longer target 0.10% on the April 2024 Australian Commonwealth Government bond. The cash rate was left unchanged at 0.10% and they kept the amount of government debt asset purchases to a rate of AUD 4 billion a week at least until mid-February 2022.

The targeted bond ended where it started the day, yielding 0.72% after initially dipping to 0.67% and then trading up to 0.75%. The RBA also abandoned the timeframe guidance for a potential cash rate hike.

AUD/USD went lower after the meeting and appears to be aiming to test the recent low at 0.7450.

A less dovish RBA has implications for Australian companies as potentially higher funding costs undermine company valuations. The ASX 200 moved to a 2-week low. Australian commodity export markets have also been moving lower through the week, with energy and iron ore particularly hit.

Iron ore went to limit down on China’s Dalian Commodity Exchange today. The implications of the weaker than expected Chinese PMI numbers, released on the weekend, impacted prices. Chinese government policy also weighed on the commodity.

Additionally, US President, Joe Biden, and EU Commission Head, Ursula von der Leyen, announced a pact to increase tariffs and crack down on ‘dirty’ steel on the sidelines of the G20 in Rome over the weekend. It seems apparent that Chinese steel production will be most affected by the policy.

The US session saw their equities make another record high. Chicago Board of Trade (CBOT) wheat futures made an 11-year high. If food prices start escalating, the implications for inflation are not favourable for loose monetary policy being maintained.

Oil is holding on to a 4-day rally. Asian equities were mixed with Korea’s Kospi index the out-performer while mainland Chinese stocks were hit the hardest.

Central bank focus now turns to the Fed on Wednesday and the Bank of England on Thursday. Both meeting have tightening anticipated by markets, it seems to be a matter of how much tightening will be delivered.

The ASX 200 moved below a recent low and an ascending trend line today, but managed to close above both of them.

On the topside, there could be resistance at the 55-day and 100-day simple moving averages that are both near yesterday and today’s high. 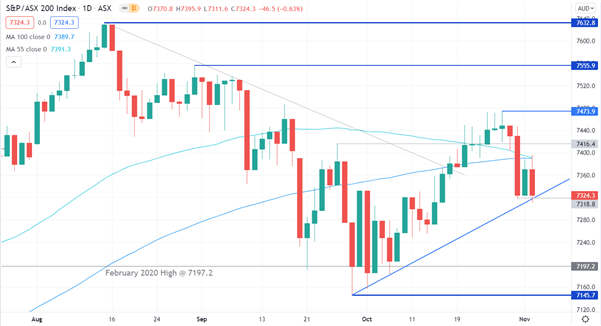