The US Dollar was knocked backward as Federal Reserve Chair Jerome Powell struck a dovish tone in the press conference following the FOMC monetary policy announcement. The central bank chief repeatedly reiterated that the economy is “some ways off” from having made substantial progress on policymakers’ dual objectives of maximum employment and price stability.

That was read to mean that the process of gradually winding down – i.e. ‘tapering’ – monthly QE asset purchases would not begin in the near term. Looking back to how policy began to be normalized on the way out of the 2008 global financial crisis and the follow-on Great Recession, incrementally reducing asset purchases to zero was the pre-requisite for interest rate hikes. Powell hinted today that this sequencing is still preferred.

WHAT IS THE FED REALLY SAYING TO FINANCIAL MARKETS?

Yet it was not all dovish from the US central bank. Perhaps most interestingly, Mr Powell acknowledged that Fed officials reviewed considerations on adjusting bond purchases. “Adjusting” in this context ought to be read as “reducing”, because an expansion of QE is decidedly not on the table. Indeed, yields put in a cyclical bottom while gold prices tellingly topped in August 2020, as the Fed marked the end of stimulus escalation.

This refrain comes alongside a unanimously approved policy statement that said progress toward meeting tapering pre-conditions had been made. Piecing all this together, it seems like the storied “talking about tapering” – itself a market-recognized marker on the way to tightening – has not only occurred, but Fed officials unanimously agree it is now relatively closer at hand.

What’s more, the markets were unperturbed. “Talking about tapering” would have been expected to spook investors even quite recently. Not only did traders take today’s messaging in stride, they dubbed it “dovish”. That speaks to the success of the Fed’s messaging strategy, kicked off with June’s upshift in the rate hike timeline and followed by soothing reassurances from Mr Powell in semi-annual Congressional testimony.

All told, the FOMC seems to be trying to carefully acclimate markets to the idea that stimulus will be would down sooner rather than later. The 2013 “taper tantrum” marked a well-learned lesson for the stewards of US monetary policy: they gave themselves nearly a year to sweet-talk markets ahead of every subsequent turning point along the normalization journey. A similar process seems to be underway once again. 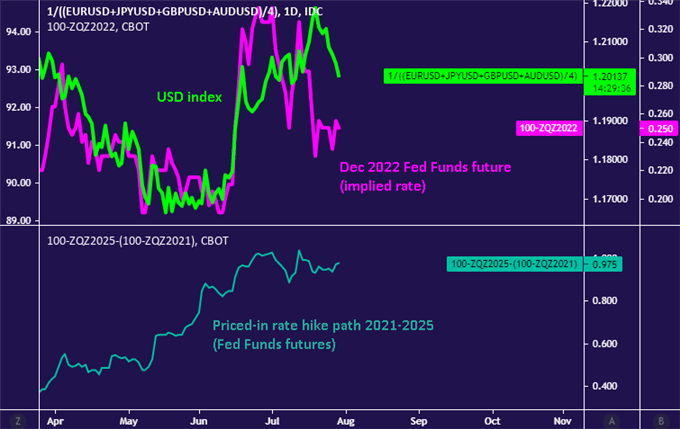 Two key conclusions follow. First, the markets feared the possibility that the Fed may be keen to speed the process up for a second consecutive month in July, and were relieved that this did not occur. Second, the path of least resistance for US monetary policy continues to favor a less-dovish stance over time. Indeed, one rate rise is still eyed in 2022 and the priced-in path through 2025 remains unchanged, implying about 100bps in hikes.

This bodes well for the US Dollar. Despite the recent pullback, it remains decidedly stronger than when the Fed began the process of inching policy away from dovish extremes in earnest mid-June. Looking ahead, a first look at second-quarter GDP data is in focus today. Leading PMI data suggests that output growth continued to pick up steam into the mid-year mark despite a cooling-off in June. That may help support USD recovery.

The Australian Dollar struggled to gain traction against its US namesake despite the Greenback’s post-FOMC weakness. Tellingly, AUD/USD remains pinned below support-turned-resistance in the 0.7384-0.7413 area. A large Head and Shoulders top carved out since the start of the year hints at a broadly bearish bias.

The first layer of major support is in the 0.7222-44 zone, with a daily close below that opening the door for resuming the downtrend triggered by the H&S pattern. That setup implies an approximated measured move down to the 0.7120-30 region.

Establishing a foothold above the 0.7413 seems to be a pre-requisite for neutralizing immediate selling pressure. That might begin a recovery that puts the 0.76 figure within buyers’ reach. A clear-cut invalidation of the near-term downtrend is needed to draw firm conclusions however. 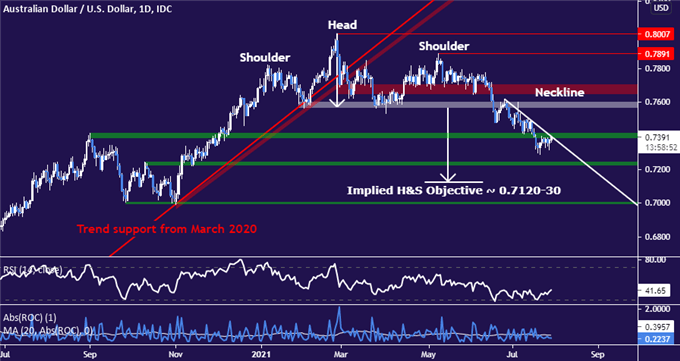