US Dollar May Rise if FOMC Minutes Reveal Inflation Debate

Most Fed officials have dismissed the uptick in prices as “transitory”, suggesting that it mostly reflects ultra-low readings 12 months ago registered amid the onset of the Covid-19 pandemic as the base for year-on-year calculations. They argue that as this base effect dissipates over time, inflation readings will retreat back to reasonable levels without threatening to overshoot the central bank’s target.

This may be a rosier assessment than reality allows. Frayed supply chains disrupted by uneven post-Covid reopening globally, a flood of policy stimulus unprecedented in its scale and the velocity of its deployment, legacy price premiums from the pre-Covid trade war and the unleashing of pent-up demand with spreading vaccination all warn that reflation may prove sticky. 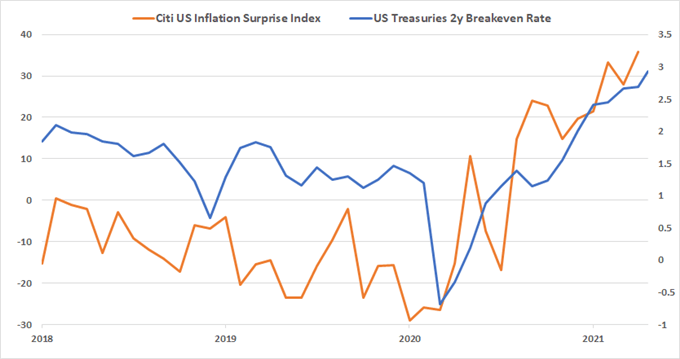 US DOLLAR MAY RISE IF FOMC MINUTES REVEAL INFLATION DEBATE

Seeing policymakers acknowledge such a risk may be enough to spook financial markets. The Fed signaled as far back as August of last year that it was done expanding its stimulus toolkit. Not surprisingly, Treasury yields bottomed and anti-fiat gold prices topped just then. The pace of economic growth has subsequently surged along with inflation bets, so an unexpected dovish pivot seems all but totally ruled out.

On the other hand, it probably would not take much to rattle baseline forecasts from the hawkish side. The central bank has been so emphatically against even considering stimulus withdrawal in its public pronouncements that mere evidence of a conversation about drawing down policy support at last month’s conclave might be enough to drive yields higher and lift the US Dollar against its G10 FX peers.

A risk-off backdrop may prove complimentary. Shares swooned in Asia-Pacific trade, with regional bourses shedding close to 1 percent on average. European exchanges have picked up on the downbeat lead, gapping sharply lower at the open and tracking down 0.9 percent. Bellwether S&P 500 futures hint at follow-through when Wall Street comes alive, which may be a boon for the safe-haven Greenback.

The US Dollar is attempting to push up from support guiding it higher against the Japanese Yen since late April. Breaching downward-sloping countertrend resistance set from the May 12 swing high looks likely to open the door for a retest of recent peaks in the 109.70-80 zone. Establishing a foothold above that may set the stage for a run above the 110.00 figure to challenge the 2021 peak.

Alternatively, a reversal through rising trend line support puts the 108.34-41 inflection region back into focus. A daily close below that may clear a path through the 108.00 handle to the April 23 trough at 107.45. 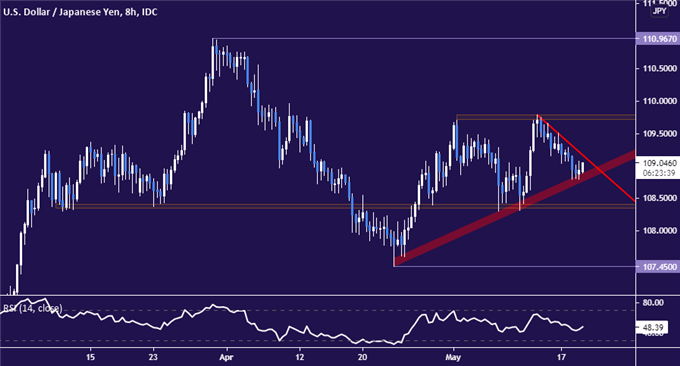