US Dollar Looks to Retail Sales, Jobless Claims Data for a Lifeline

The US Dollar is back on the defensive as Asia Pacific trade transitions into European hours. The currency is being pushed lower alongside benchmark 10-year US Treasury bond yields while gold and bellwether S&P 500 futures – a proxy for market-wide risk appetite – track higher.

Taken together, this seems to suggest that worries about sooner-than-expected Fed tightening are receding. Markets have been increasingly concerned about diminishing scope for stimulus in recent weeks as fiscal stimulus and spreading vaccination fueled reflation bets.

The sense of urgency seems to have ebbed somewhat as Treasury yields paused what had been a brisk rally since the start of the year in the first two weeks of April. Breakeven rate measures of 2-5 year inflation expectations implied in bond markets stalled in tandem.

Helping to calm the waters today seemed to be a steady stream of comments from key Fed officials. Chair Powell, Vice Chair Clarida and influential New York Fed President Williams all struck a dovish tone, signaling that the withdrawal of policy support is nowhere on the near-term horizon. 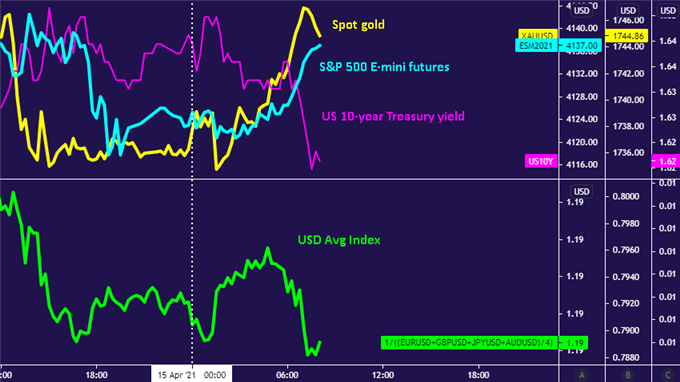 On balance, this is nothing new. The markets’ speculative push for higher yields and a stronger Greenback came against the backdrop of analogous Fed rhetoric in March, with traders seemingly betting that the ever-cautious monetary authority will change its tune once its inflation mandate is under pressure.

To that end, incoming economic data may alter baseline thinking yet again. Eye-catching improvements are expected on the March editions of US retail sales and industrial production figures, and the jobless claims report is seen showing the smallest rise in three weeks.

US economic data has perked up relative to baseline forecasts recently, according to data from Citigroup. More of the same – coupled with the promise of future outperformance thanks to an expansionary fiscal tailwind – may breathe new life into the reflation narrative.

In this scenario, USD may find legs for a rebound against most of its major counterparts. The anti-risk Japanese Yen may also fare relatively well if tightening fears weigh on broader sentiment. Currencies with few prospects for follow-on tightening, like the Euro, may be most vulnerable.