A flurry of strong economic data release may prove to be a driving force for the US Dollar in the coming days, as base effects come into play. Headline inflation is expected to spike to 2.5%, while the core inflation rate is forecast to climb to 1.5% in March.

Although this notable climb in consumer price growth is expected to be transitory by the Federal Reserve, a larger-than-expected print could reignite the tapering saga that drove Treasury yields to 12-month highs at the tail end of March.

$54 billion worth of 10- and 30-year Treasury auctions could also ignite a fresh wave of selling in US debt markets, and in turn drive the Greenback higher against its major counterparts.

However, the prospect of a smaller infrastructure package than the originally proposed $2.25 trillion could cool inflation bets and dull the downward pressure on US Treasuries. President Joe Biden has hinted that he could favour a smaller package in a sit-down with a bipartisan group of policymakers.

Indeed, 5-year inflation expectations have turned lower in recent days, sliding 6 basis points since peaking at 2.20% on March 31. Nevertheless, with retail sales figures expected to come in hotter-than-expected, on the back of stimulus cheque spending, renewed inflationary fears seem more than likely. 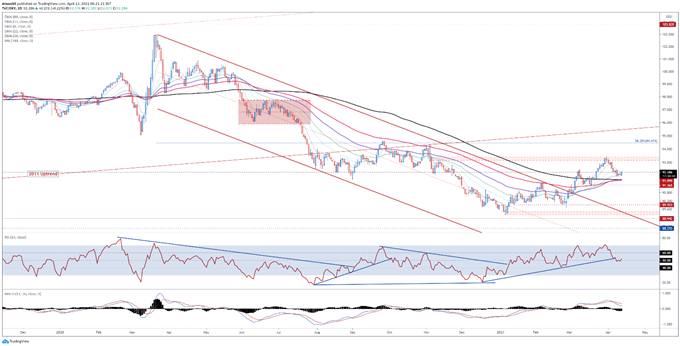 From a technical perspective, the US Dollar Index (DXY) is poised to climb higher as prices remain constructively positioned above key psychological support at 92.00.

With the RSI and MACD tracking above their respective neutral midpoints, the path of least seems skewed to the upside. 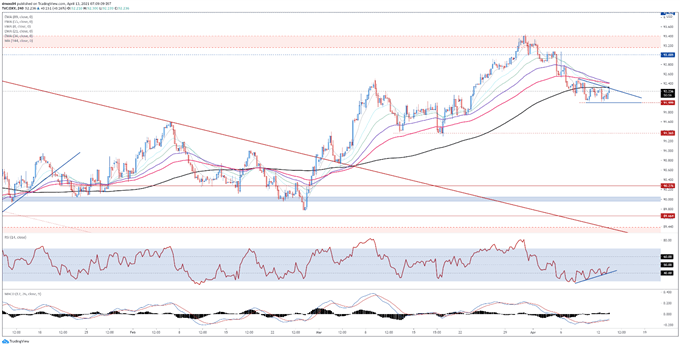 Zooming into the four-hour chart paints a rather mixed outlook for the DXY, as prices consolidate within a Descending Triangle just above psychological support at 92.00.

Bullish RSI divergence, and a bullish MACD crossover, suggests that the path of least resistance is higher however, prices are continuing to track below all three longer-term moving averages.

Nevertheless, a break above the triangle hypotenuse and sentiment-defining 144-EMA (92.32) likely triggers a topside push to challenge key resistance at 93.00, with a push above bringing the yearly high (93.44) into play.

However, breaching triangle support could open the door for sellers to drive the index back towards 91.36.