It proved to be a rather mixed day of trade for equity markets during Asia-Pacific trade as investors mulled robust jobs figures out of the US on Friday and whether or not that may influence the Federal Reserve’s outlook on monetary policy moving forward. China’s CSI 300 fell 0.55% and Japan’s Nikkei 225 toppled 1.15%, as tensions between the two nations notable escalate ahead of the US-Japan summit next week. Australia’s ASX 200 jumped 0.84%, buoyed by the RBA’s commitment to provide additional monetary stimulus if necessary in the coming months.

The US Dollar has slipped lower in recent days against its major counterparts, as robust non-farm payrolls figures stoked risk appetite and weighed on the haven-associated currency. The US economy added 916,000 jobs in March, the most in 7 months and far surpassing expectations of a 647,000 print, on the back of easing restrictions, declining Covid-19 infection rates, rapid distribution of vaccines and robust fiscal support.

ISM Services PMI also pointed to the strongest growth in services activity on record, coming in at 63.7. Well above consensus estimates of a 59 print. This string of better-than-expected economic data buoyed market sentiment and paved the way for the under-fire Euro to peg back lost ground against the Greenback, with the EUR-heavy US Dollar Index (DXY) sliding back to key support at 92.50.

However, this dynamic may prove to be nothing more than a counter-trend pullback, given the divergence in fundamentals between the European Union and United States. Indeed, a resurgence of coronavirus infections, and the resulting tightening of restrictions, in several European nations will likely undermine the Euro in the near term.

Moreover, the recent order from the German Constitutional Court preventing President Steinmeier from ratifying the European Recovery Fund, in tandem with the European Central Bank upping its pace of weekly bond purchases, will likely widen the yield spread between German Bunds and US Treasuries.

In contrast, President Joe Biden’s administration is planning on implementing a $2.25 trillion stimulus package later this year, while the Federal Reserve seem relatively unperturbed by the recent rise in longer-term Treasury rates.

Therefore, it appears that the US Dollar Index may continue to press higher in the coming weeks and in turn open the door for the EUR/USD exchange rate to extend its recent slide lower. 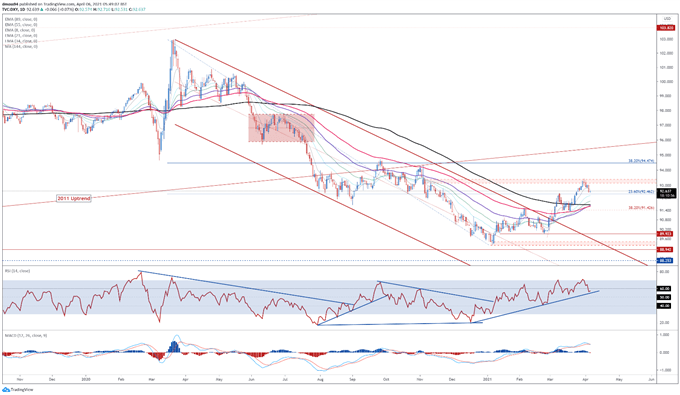 From a technical perspective, the US Dollar Index (DXY) appears poised to continue climbing higher in the near term, as price remains constructively perched above 92.50 after failing to breach range resistance at 93.20 – 93.40.

With a bullish Golden Cross taking shape on the moving averages, and the RSI continuing to track its uptrend extending from the December extremes, the path of least resistance seems skewed to the topside.

Remaining constructively positioned above the March 9 high (92.50) likely opens the door for price to retest the yearly high (93.44), with a daily close above needed to bring the 38.2% Fibonacci (94.47) into the crosshairs. 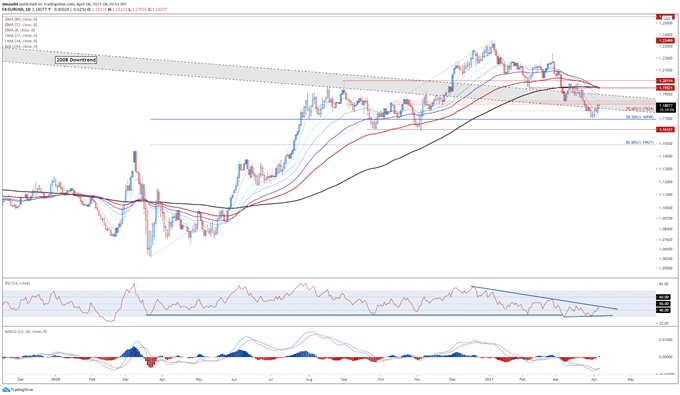 Given the DXY is poised to move higher, and the Euro makes up 57% of the index, further losses could be in the pipeline for the EUR/USD exchange rate.

With a Death Cross moving average formation taking shape, and the RSI continuing to track the downtrend extending from the December extremes, the path of least resistance seems lower.