In FX markets, the risk-sensitive AUD, NZD and NOK largely outperformed while the haven-associated JPY, USD and CHF lost ground against their major counterparts. Gold and silver prices crept higher as yields on US-10 year Treasuries dipped back below 1.08%.

Looking ahead, the European Central Bank’s monetary policy meeting headlines the economic docket alongside jobless claims data out of the US. 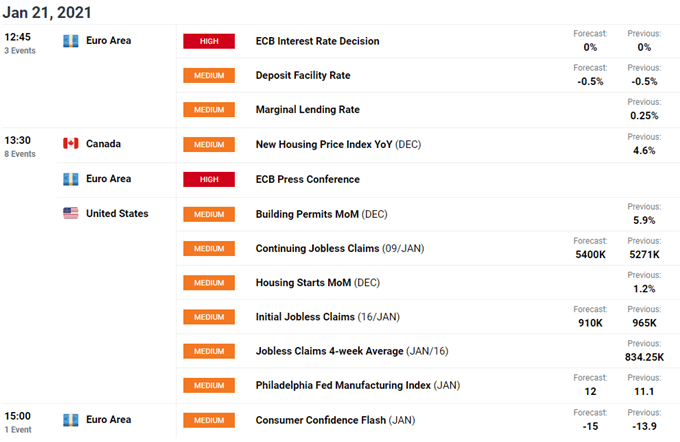 The European Central Bank’s upcoming monetary policy meeting will likely determine the near term trajectory for the Euro, as the relentless surge of coronavirus cases across the trading bloc darkens the region’s economic outlook.

Spain reported a record 18,500 new cases of Covid-19 yesterday while the 7-day moving average tracking infections continues to hover above 15,000 in Germany, despite the imposition of a nation-wide lockdown at the end of November.

The cumbersome rate of vaccinations in the European Union also risks elongating the use of current restrictions, with only 1.4 vaccines administered per 100 people. In comparison, the United Kingdom has inoculated 7.1 in 100 while the United States has vaccinated 5.

These restrictions have had a notable impact on economic data, with consumer prices declining for a fifth consecutive month in December and the core inflation rate hovering at a record low of 0.2%.

Nevertheless, it seems relatively unlikely that the ECB will adjust its monetary policy settings at the upcoming meeting, given that the central bank increased the “envelope of the pandemic emergency purchase programme (PEPP) by €500 billion [and] extended the horizon for net purchases under the PEPP to at least the end of March 2022” at its assembly in December.

That being said, there is the possibility that President Christine Lagarde and the Governing Council may comment on the strength of the exchange rate, in light of the consistent disinflationary pressures facing the EU. However, the need for verbal intervention seems to have diminished given that the Euro has lost a significant amount of ground against its haven-associated counterparts in recent weeks.

Therefore, the absence of any material change to the ECB’s monetary policy settings, and the lack of concern regarding the exchange rate’s current level, may allow the Euro to claw back lost ground against the US Dollar in the near term. 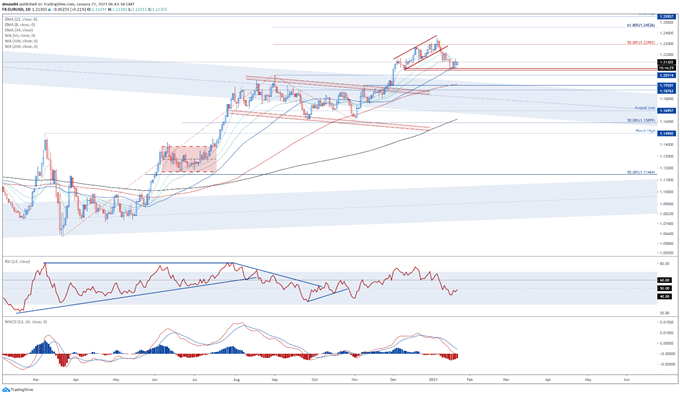 The development of the RSI hints at building bullish momentum, as the oscillator U-turns away from bearish territory below 40 and eyes a push back above its neutral midpoint.

A daily close back above the 21-EMA (1.2156) would probably neutralize near-term selling pressure and open the door for buyers to probe psychological resistance at 1.2200. Clearing that likely carves a path to retest the January high (1.2349).

Alternatively, a daily close below the January 18 low (1.2053) could trigger a more extended correction lower and bring former resistance-turned-support at 1.2050 into focus. 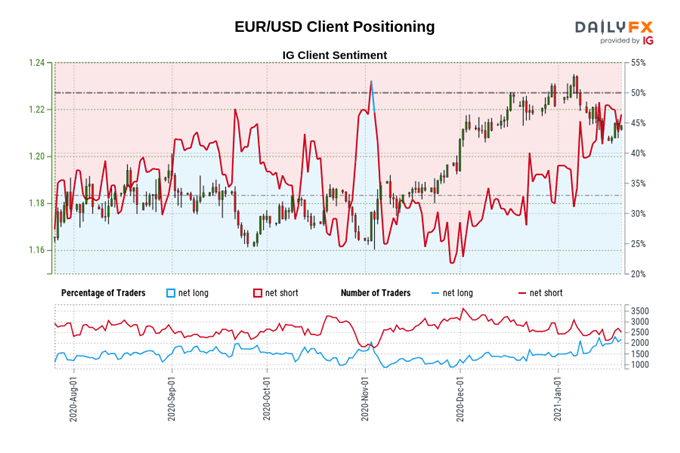