The haven-associated Japanese Yen climbed against its major counterparts whilst the US Dollar nudged slightly higher.

Looking ahead, a rather light economic docket could see market participants turn their focus to Congress and the potential introduction of further fiscal stimulus. 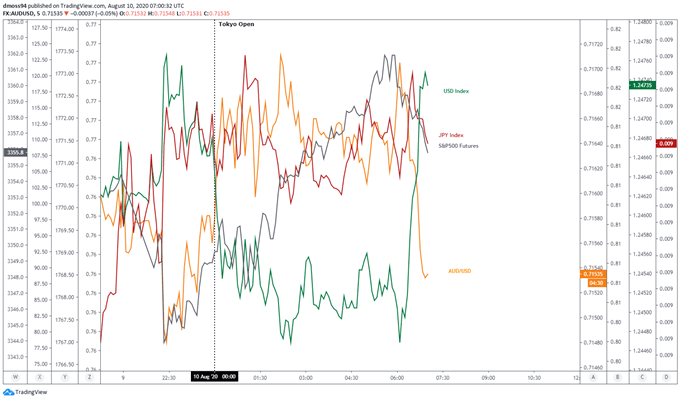 Upcoming jobs data out of the United Kingdom could spark a reversal in GBP/USD rates, should the unemployment rate in June exceed the consensus forecast 4.2%.

This economic data may hold substantially more weight than usual when considering the ongoing tapering and ultimate cessation of the British government’s £33.8 billion furlough scheme in October.

Given the measures are estimated to have supported the payrolls of over 9 million workers, premature withdrawal could see UK jobless numbers jump above 3 million and the unemployment rate surge to 10% by the end of the year, according to the National Institute of Economic and Social Research.

This assessment is in stark contrast to the relatively rosier outlook painted by the Bank of England, with committee members projecting the unemployment rate to rise “to around 7.5% by the end of the year” despite admitting “considerable uncertainty remains about the prospects for employment after those support schemes unwind”.

With the central bank assessing that “the existing stance of monetary policy remains appropriate”, a marked increase in the level of unemployment may force the BoE to reassess its current wait-and-see approach and could lead to the expansion of the current £750 billion quantitative easing (QE) program.

To that end, GBP/USD rates may come under significant pressure if employment data surprises to the downside, possibly resulting in investors positioning for the provision of more monetary stimulus and discounting the British Pound against its major counterparts. 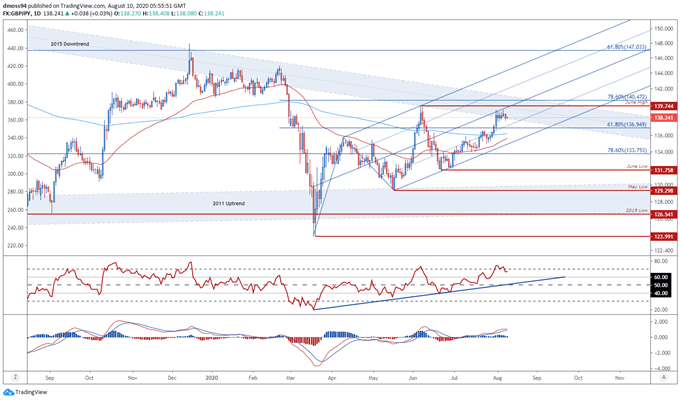 The outlook for the GBP/JPY exchange rate seems tilted to the downside despite price tracking within the confines of a bullish Schiff Pitchfork, as price carves out a potential Double Top reversal pattern at the March high (139.18).

Furthermore, the RSI hints at fading upside momentum and may encourage sellers, alongside a possible bearish crossover on the MACD indicator.

With that in mind, a pullback to support at the 61.8% Fibonacci (136.95) may likely eventuate in the coming days. Sentiment-defining support at the 200-day moving average (136.25) potentially serving as the last line of defence for GBP/JPY bulls. 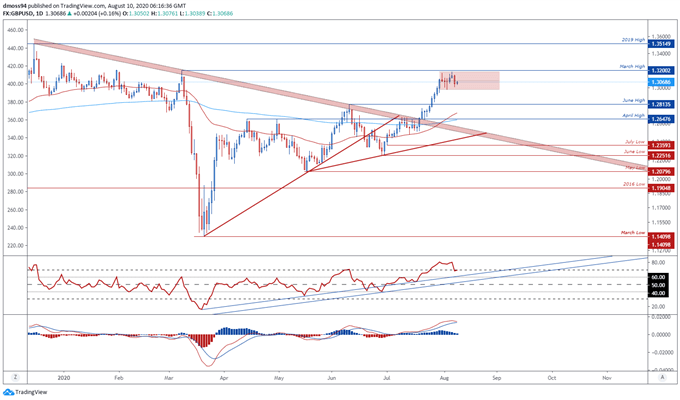 GBP/USD rates also look set for a near-term pullback after failing to break above the March high, as the RSI dives back below 70 and the MACD eyes a bearish cross below its signal line.

However, recent price development suggests the outlook for the GBP/USD exchange rate is tilted to the upside.

A potential Bull Flag continuation pattern just shy of key resistance hints at an impulsive topside surge if price can successfully close above the 1.32 level and could see price climb to test the 2019 high (1.3515).

Conversely, a daily close below the August low (1.2981) would probably invalidate the bullish pattern and could see GBP/USD fall back to support at the June high (1.2813).