The haven-associated US Dollar continued to slide against its major counterparts as market participants cheered reports that Moderna Inc’s Covid-19 vaccine successfully produced neutralizing antibodies, in all patients inoculated in preliminary safety trials.

The Japanese Yen held its ground as the Bank of Japan kept its monetary policy settings unchanged whilst the Nikkei 225 surged 1.5%, breaking through key resistance. The trade-sensitive Australian Dollar climbed back above 70, buoyed by US Dollar weakness and surging commodity prices.

Looking ahead, The Bank of Canada interest rate decision headlines the economic docket with expectations that the Canadian central bank will keep rates steady at 0.25%.

The deteriorating relationship between the world’s two biggest economies may weigh on risk-sensitive assets, as the fallout from the imposed national security law in Hong Kong intensifies US-China tensions.

US President Donald Trump seems hell-bent on proving “no administration has been tougher on China than this administration” after ordering an end to Hong Kong’s special status and introducing new legislation that gives his “administration powerful new tools to hold responsible the individuals and the entities involved in extinguishing Hong Kong’s freedom”.

These measures built on Secretary of State Mike Pompeo’s inflammatory comments on Monday “making clear [that] Beijing’s claims to offshore resources across most of the South China Sea are completely unlawful, as is its campaign of bullying to control them”.

The unprecedented involvement and open condemnation of China’s action in the hotly contested South China Sea was lambasted by the Chinese Foreign ministry warning “if the U.S continues such action, China will resolutely take countermeasures [and] will make further responses based on how the situation develops”, suggesting that the Asian powerhouse may ratchet up its retaliatory efforts.

Although White House Economic Adviser Larry Kudlow stresses that both sides are “still engaging on the phase one trade deal” it is hard to believe, given the current rhetoric, that a comprehensive trade agreement can be agreed.

To that end, traders may keep a watchful eye on the USD/CNH exchange rate which could serve as a powerful retaliatory tool for China should tensions continue to escalate and as a thermometer for US-Sino relations. 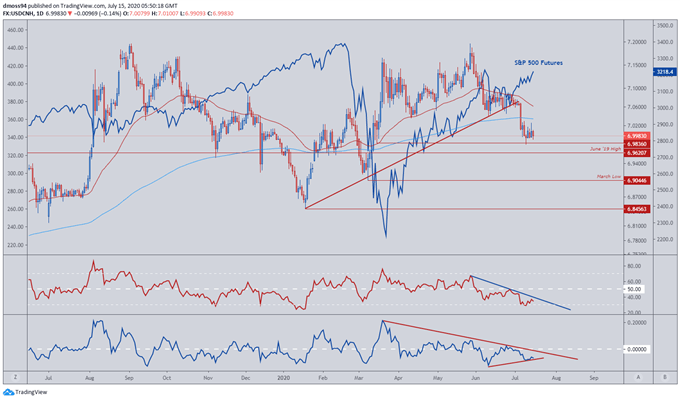 The USD/CNH exchange rate proved to be a bell-weather for US-China trade negotiations in 2019, with the surge above the psychologically pivotal 7 handle coinciding with a breakdown in talks between the two economic powerhouses in early 2019.

The subsequent strengthening of the Chinese Reminbi from September 2019 onwards coincided with progress being made in trade negotiations, culminating in the exchange rate setting the yearly low (6.8456) just days before the “phase one’ trade deal was signed.

As it stands, the Chinese Reminbi’s recent recovery back below the 200-day moving average (7.035) has been positive for global equity markets as the USD/CNH exchange rate typically portrays an inverse relationship with US benchmark indices.

However, this appreciation has stalled in recent days, hinting at a possible reversal in the exchange rate as well as broad market sentiment.

USD/CNH climbing back above the 7 handle may carve a path back to the 200-day moving average (7.035) and June low (7.04), potentially fueling a period of global risk aversion and a sharp correction in US equity prices.