Early into Asia’s Thursday trading session, APAC equities were mixed after Wall Street closed the day with the S&P 500 index over four percent higher. The source of the rally came from a multiple one factors. One of which was optimism about the prospect of containing the coronavirus after Congress signed a bill providing billions of dollars’ worth of funding to stop the spread. However, in South Korea, officials reported that the total number of those infected rose to over 5,700.

US DOLLAR MAY SUFFER VS SWISS FRANC

The US Dollar may fall against the Swiss Franc if fear about a Eurozone recession amplifies demand for the anti-risk CHF. EU officials sent a chilling message about Italy’s and France’s growth prospects, warning that the bloc’s second and third largest economies could be at risk of falling into a recession. Meanwhile, Germany – the “steam engine” of Europe – is not far behind as it contends with weaker demand from its neighbors.

The spread of the coronavirus throughout the continent comes at a time when regional economies were beginning to show signs of stabilization after being haunted by intensified political woes. Some of these include turbulent Italian politics, Brexit and growing inter-regional discontent as the tension between North and South intensifies over structural reforms and fiscal autonomy.

Now, the spread of COVID-19 to these already-vulnerable economies against the backdrop of a fragile global economy is inflaming recession risks as countries like Italy close schools and towns. Panic about the virus is also being amplified by commentary from Germany’s Health Minister who says COVID-19 has become a “global pandemic”.

USD/CHF may attempt to climb out of the two-year low hole it is currently trading in as it eyes former support-turned-resistance between 0.9610 and 0.9649. Clearing that ceiling opens the door to further gains until the pair encounters friction at 0.9844, though there will likely be some upside agitation along the way. For more updates on USD/CHF, be sure to follow me on Twitter @ZabelinDimitri. 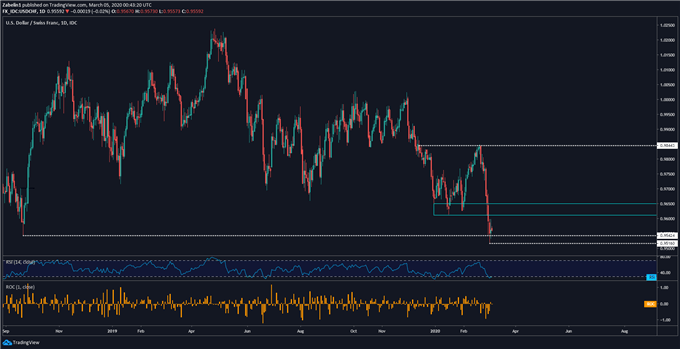