The British Pound may fall if CPI statistics underwhelm and inflame what are already kindling ‘near-term stimulus’ expectations from the Bank of England (BoE). Economic data out of the UK has been tending to underperform relative to economists’ expectations as Brexit uncertainty chips away at business confidence. While the fundamental risks are temporarily abating, Sterling continues to find itself under pressure.

GBP May Fall on CPI

Year-on-year CPI is expected to remain unchanged at 1.5 percent, with its core counterpart – excluding volatile inputs like food and energy – is also anticipated to remain frozen at its prior print of 1.7 percent. Since peaking in November 2017, price growth has been on a downtrend and continues to hover below the central banks’ 2 percent target.

Part of the weakness in CPI comes from the disinflationary impact of the US-China trade war that has compounded the UK’s contraction in industrial production; and officials have noticed. Last week, policymakers said the spell of economic weakness may require a “prompt response” in the form of ‘near-term stimulus’. Sterling subsequently fell.

What this indicates is the British Pound is once again sensitive to economic data to the extent that it has the capacity to bring the BoE easing timeline closer if prevailing conditions warrant it. This is a new trend relative to most of 2019 where it remains relatively impervious to sour economic data amid the BoE’s stance to only adjust interest rates until after Brexit. The recent comments from officials suggests their position has changed.

GBP/USD continues to remain range-bound following its spike on the UK election outcome and the spectacular decline that followed. The pair is now approaching support at 1.2905 where buying pressure may overcome the downside pressure of the sellers, though sour CPI data may support the latter and overwhelm the former. A break below 1.2905 opens the door to testing a multi-tiered floor between 1.2769 and 1.2816. GBP/USD – Daily Chart 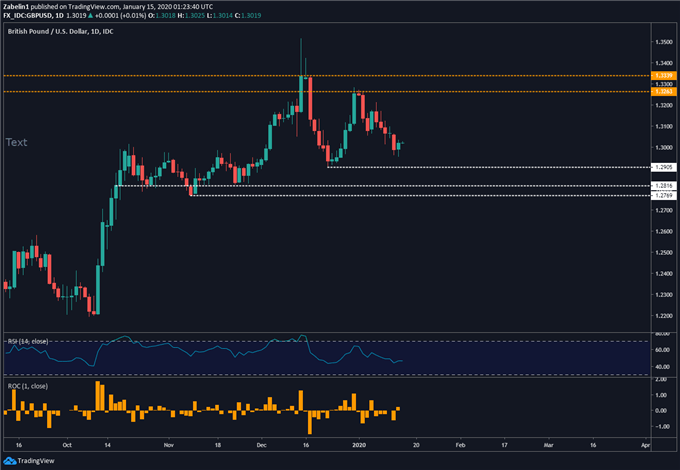