Fourth-quarter Eurozone GDP data headlines the economic calendar in European trading hours. The year-on-year trend growth rate is expected to slow to 1.2 percent, the weakest in five years. Data flow out of the currency bloc has steadily underperformed relative to forecasts since September, hinting analysts’ models are too rosy and opening the door for a downside surprise.

A weak result has scope to weigh on the Euro as traders mark down the probability of an ECB interest rate hike this year. As it stands, the chance of an increase is priced in at 39.6 percent. With markets thus already leaning toward the likelihood of standstillbefore the calendar turns to 2020, the impact of a disappointment may be even more pronounced in assets geared to global growth than the single currency.

Sentiment-sensitive currencies like the Australian, Canadian and New Zealand Dollars surged alongside stocks after yesterday’s seemingly dovish FOMC rate decision. That makes some sense: a slower rise in credit costs can be supportive for economic growth, all else being equal. However, worries about ominous macro-level headwinds accounting for the policy shift seem to tarnish its pro-risk implications.

In fact, the probability of a global recession within one year has jumped to 19.2 percent – the highest since June 2013 – according to a survey of economists by Bloomberg. Traders may be reminded as much if the Eurozone GDP report accents global slowdown fears. That may put post-FOMC price moves into reverse, pushing commodity-bloc currencies lower while the anti-risk Japanese Yen and US Dollar rise.

US-China trade negotiations are another important input for establishing the level of market-wide risk appetite. Chinese Vice Premier Liu He is due for a second day of talks with US officials including President Donald Trump on a visit to Washington, DC. If the trip concludes without a clear path toward trade war de-escalation, the markets will have yet another reason to worry.

With that said, investors seem keen to give negotiators the benefit of the doubt. This means that even a modest nudge forward – like planningfurther talks before the March deadline for a deal that presidents Xi and Trump set out last year – might buoy animal spirits. The fillip is unlikely to materialize absent at least some specifics however. Furthermore, hopeful pre-positioning ahead of Mr Liu’s visit might dull its impact. 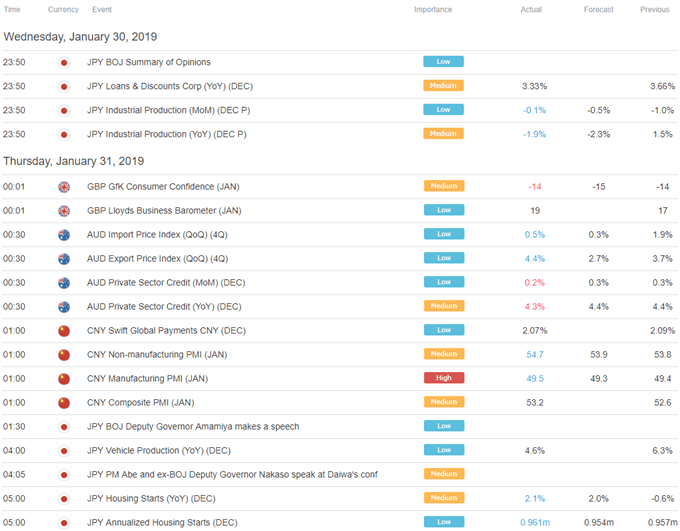 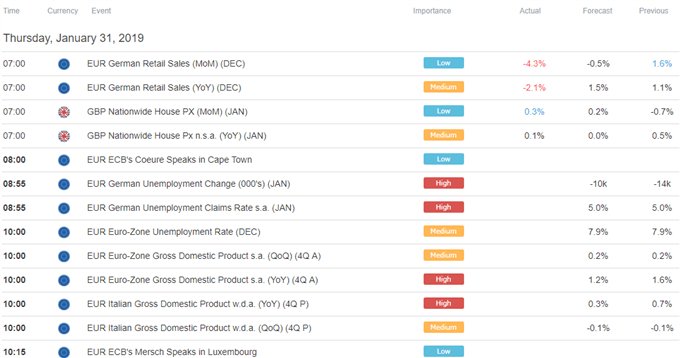