British Pound May Fall as US Dollar Gains on BOE, Fed Comments

October’s UK retail sales statistics headline a lackluster data docket in European trading hours. A narrow improvement from the prior month is expected but whatever comes across the wires seems unlikely to mean much for near-term BOE monetary policy, and thereby for the British Pound.

Comments from a broad group of BOE officials including Governor Mark Carney at the central bank’s Future Forum might prove more market-moving. Rhetoric reiterating that a recent rate hike will not mark the start of a sustained near-term tightening cycle might not sit well with Sterling.

Fed-speak enters the spotlight later in the day, with speeches from presidents of the US central bank’s Cleveland, Dallas and San Francisco branches (Mester, Kaplan and Williams respectively) due to cross the wires. Remarks from Governor Lael Brainard are likewise on tap.

With a December rate hike now all-but-fully priced in, the 2018 policy path is the central object of speculation. The US Dollar may rise if policymakers seem to endorse the baseline view predicting three increases next year, especially if expansionary fiscal policy isn’t a necessary ingredient in the forecast.

The Australian Dollar edged higher in Asia Pacific trade, managing tepid but broad-based gains after October’s labor-market data crossed the wires. Headline employment disappointed but the jobless rate edged down, albeit against a backdrop of diminished labor-force participation.

An upward nudge after such mixed results hints the data was significant in its passing rather than its substance, clearing away event risk and opening the door for a correction following yesterday’s selloff. The Aussie was the weakest among its G10 counterparts yesterday in the wake of soft wage inflation statistics.

The New Zealand Dollar declined alongside local government bonds while the benchmark S&P/NZX 50 stock traded higher. Taken together, this hinted that a pickup in sentiment might have inspired capital flows out of cash as well as haven assets and into riskier alternatives.

Investors’ brighter disposition weighed against the Yen as well. Japanese shares joined in a broad recovery across regional bourses, with the MSCI Asia Pacific benchmark adding 0.5 percent. Not surprisingly, that put pressure on the standby anti-risk currency.

Want to learn how to include economic news-flow into your trading strategy? See our free guide here! 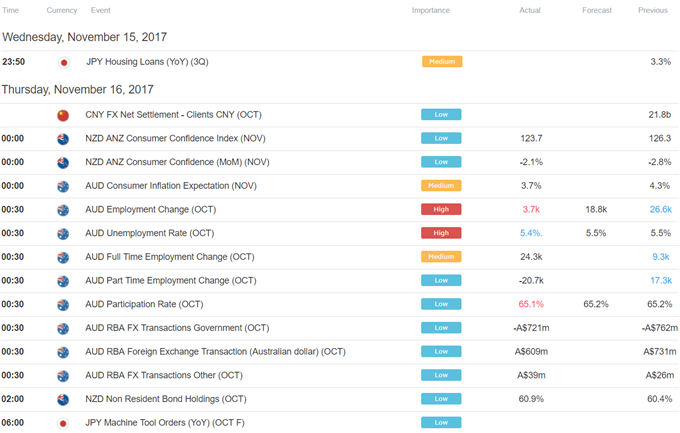