US Dollar May Rise as Euro Falls on Yellen, Draghi Speeches

Currency markets put in a muted performance in Asia Pacific trade as investors looked ahead to headlines emerging from the Fed’s annual monetary policy symposium underway in Jackson Hole, Wyoming. Traders are most keen to hear comments from Fed Chair Janet Yellen and ECB President Mario Draghi, both of which may set the stage for major policy changes.

Yellen’s remarks are first to cross the wires and will be closely scrutinized for clues pointing to the imminent start of so-called “quantitative tightening” (QT) – the unwinding of the US central bank’s massive balance sheet accumulated in the aftermath of the 2008-9 global financial crisis. Minutes from July’s FOMC meeting suggested that is slated for “an upcoming meeting”. Markets will want to know if September is it.

Beyond the balance sheet, the issue of a third rate hike before year-end is also on the table. A smooth start to QT in September would give the central bank room for a third increase – a move telegraphed in official forecasts since beginning of the year – at its December conclave. With that in mind, traders will want to know if Yellen expects the “idiosyncratic” forces holding down inflation to be in retreat by then.

Needless to say, rhetoric suggesting the next phase of stimulus withdrawal is at hand is likely to boost the US Dollar, especially if another rate hike is kept firmly on the table. Indeed, the priced-in probability of such an outcome implied in Fed Funds futures stands at just 37.4 percent at present, leaving ample room for markets to readjust portfolios for a more hawkish posture.

Turning to Mr Draghi, traders will comb through his speech for comments setting the stage for tapering of the ECB’s QE asset purchase program. The central bank has suggested that its President will refrain from such guidance but expectant markets are rife with speculation all the same. The Euro may succumb to selling pressure if their hopes are disappointed.

What is the #1 mistake that FX traders make and how can you fix it? Find out here ! 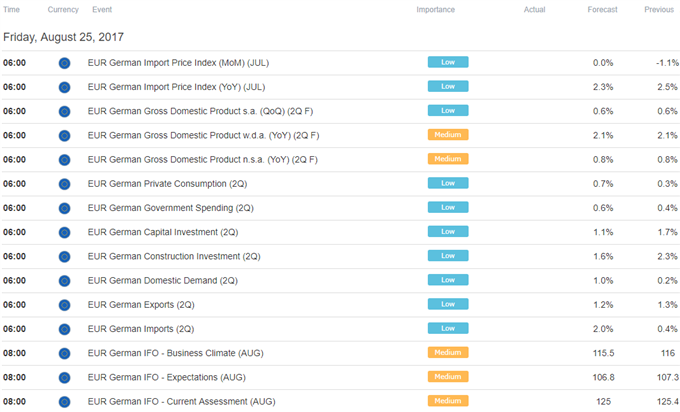