The Japanese Yen underperformed in overnight trade after the BOJ stepped in to push back against rising long-term bond yields. The British Pound also traded lower, falling alongside front-end UK borrowing costs. The move followed a disappointing round of industrial production and trade figures that seemingly weighed against near-term BOE rate hike expectations.

The Australian Dollar rose as the spread between local 10-year government bond yields and US equivalents widened. This hints that gains may have reflected pre-positioning ahead of the upcoming release of June’s US employment statistics, with yesterday’s soft private-sector jobs growth estimate from ADP warning of disappointment and boosting yield-seeking alternatives to the greenback.

Consensus forecasts suggest the US added 178k jobs last month, up from 138k in May. The on-year pace of wage inflation is also expected to tick up to 2.6 percent, snapping a three-month losing streak. ADP data is a notoriously inconsistent predictor of subsequent official numbers and US news-flow has conspicuously firmed relative to expectations recently, opening the door for an upside surprise that might boost the US Dollar.

The G20 leaders’ summit in Hamburg, Germany represents potentially potent kneejerk volatility risk. Much has been made of the first face-to-face meeting between US President Donald Trump and his Russian counterpart Vladimir Putin. This may be just the tip of the iceberg however, with a slew of other key issues – from global trade norms and FX policy to Brexit – that may appear in sideline commentary.

What will shape major FX market trends in the next 3 months? See our forecasts here! 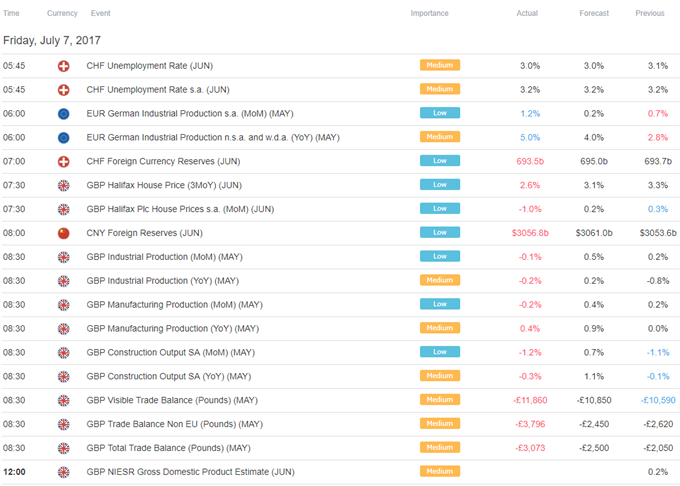