EUR/USD, CAD, Cable in the Spotlight Ahead of Heavy Outlay of Drivers

- Currency markets flared with a brief dose of excitement this week as a quick blip of USD-strength showed around the FOMC rate decision. But that strength was fleeting, and sellers have come-back into USD.

- A heavy outlay of data and drivers for next week can keep markets volatile in the near-term. We look at three of the more pressing price action themes in FX-land below.

In what’s already been a rather eventful week across global markets, we have two more high-impact drivers to get through ahead of the weekend with Canadian CPI and a pivotal speech from British PM, Theresa May. But next week is loaded with high-impact prints, and there’s a heavy emphasis of U.S. data with significant releases offered every day Tuesday-Friday. Also of interest are weekend elections in New Zealand and Germany; a speech by Fed chair Janet Yellen on Tuesday, European inflation figures and an RBNZ rate decision on Wednesday evening (Thursday morning in New Zealand). We also hear from Kuroda of the BoJ, William Dudley of the Fed, and Mario Draghi on Monday. So, next week is loaded with drivers.

Below, we’re looking at three of the more pressing price action themes as we head into a heavy outlay of data points.

The Canadian Dollar will likely remain on the move in the immediate future. At 8:30 AM ET on Friday morning, we get Canadian CPI and this has very much been at the forefront of the recent hawkish shift seen at the Bank of Canada. Since hiking rates for the first time in over ten years in July, the Canadian Dollar has been on a rampage, and USD/CAD has plummeted through multiple zones of support in the process. Just ahead of the Bank of Canada’s rate decision earlier in the month, we noted a key trend-line that’s held in USD/CAD since 2012. Ahead of that rate decision, prices were finding support off of this trend-line, but after the BoC hiked rates again, CAD strengthened, the trend-line gave way and prices moved-down to a fresh two-year low.

We noted a series of bear traps on the pair in subsequent webinars, and yesterday we looked at that prior support trend-line beginning to show as resistance after the FOMC-fueled pop in the U.S. Dollar. Next week brings a couple of key drivers out of Canada: BoC Governor, Stephen Poloz is giving a speech on Wednesday afternoon, and Canadian GDP is released on Friday morning. 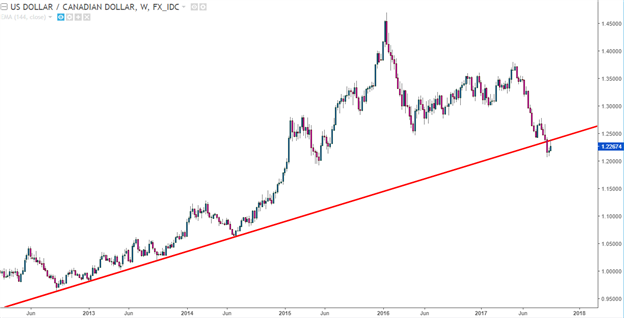 The British Pound has been going through some change of recent. After the Bank of England signaled that rate hikes may be on the horizon at the bank’s rate decision two weeks ago, the Pound broke out to fresh yearly highs, tagging the 1.3600 level a day after the announcement after having been below 1.3200.

We warned against chasing the move at the time , instead directing attention to a key support level at 1.3478, which is the 50% retracement of the ‘Brexit move’ in the pair, and over the past week this support has come-in multiple times as a range has begun to show near the top of the trend.

GBP/USD Daily: Fresh Yearly Highs, Support at the 50% Fib of the Brexit Move 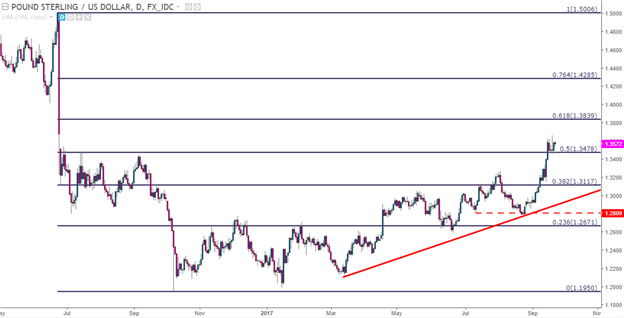 With what could end up becoming a rather pertinent driver for the currency, Prime Minister Theresa May is giving a speech in Florence later this morning. If this brings on a breach of support, the door can be open the door for a deeper level of support for longer-term bullish plays. On the chart below, we’re looking at this near-term range, and we’ve applied two additional areas to follow for higher-low support should a deeper correction show above the confluent zone that runs from 1.3117-1.3187. 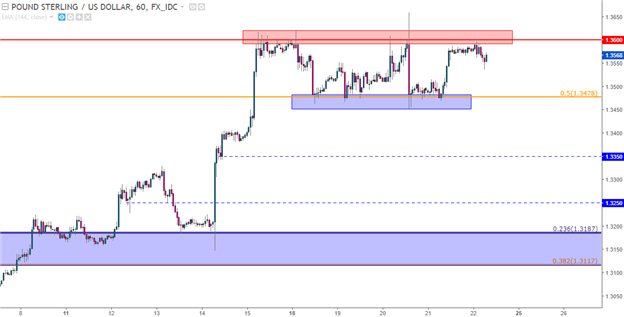 The Euro has been running-higher for most of the year, but so far in September EUR/USD has spent much of the month in a range-bound fashion. A series of pivotal CPI prints on the calendar for next week combined with some comments from Mario Draghi will likely keep the Euro on the move. We discussed EUR/USD’s continued struggle at the 1.2000 psychological level: After first crossing this price in latter-August, we’ve seen a continued element of resistance as buyers have continued to lose motivation with EUR/USD pricing above 1.2000. But – there’s also been some element of support throughout the month, as a series of higher-lows have shown above the prior swing low of 1.1821. 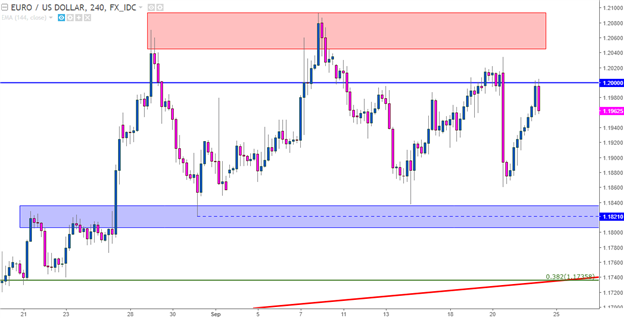 Given the pair’s struggle above the 1.2000 level, we may need to see a deeper retracement before the longer-term bullish trend is ready for continuation. Also of interest is a trend-line underneath price action that may be able to offer some framework for that deeper retracement, as prices breaking below this September range would likely clear out a bunch of running stops. This trend-line projection helped to catch the two-month low in the pair, and a subsequent re-test can open the door for longer-term bullish scenarios. 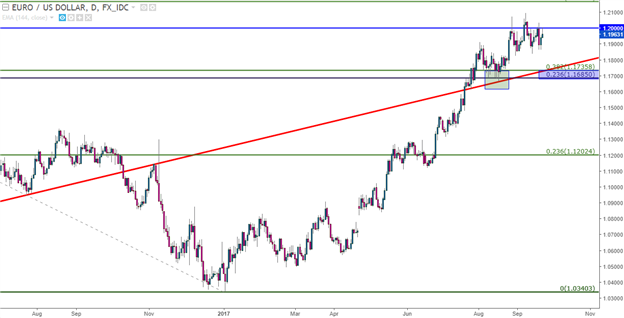