- Yesterday’s FOMC rate decision saw the bank announce the start of balance sheet reduction in October along with the expectation for another rate hike in December.

- This produced a quick bout of USD-strength that lasted for about ten minutes into Chair Yellen’s presser, at which point resistance showed and has continued to hold. Does this new information have the potential to reverse the Greenback’s 2017 down-trend?

Yesterday brought a widely-awaited Federal Reserve rate decision, and at that meeting the bank announced that balance sheet reduction would begin in October. This wasn’t really a surprise, as the Fed has been talking about this since March. But what may have been a bit more unexpected was just how hawkish the Fed turned out to be in terms of forward-looking rate expectations in the face of the fall seen with inflation throughout this year. Earlier in the year, Chair Yellen said that she thought the drop in inflation was transitory; but a continued lag in prices seems to indicate that whatever we’re seeing is a bit more than transitory. Nonetheless, the Fed reiterated their view on rate expectations to the end of 2018.

The Fed said that they’re expecting one more hike this year, three more next year, two in 2019 and one in 2020. If this goes through as planned, the Federal Reserve calculates the final destination for rate policy, or the terminal rate to arrive at a range of 2.75-3% at some point in 2020. This would be significantly below longer-term historical averages for interest rates so, in essence, it still displays a hint of dovishness. This also looks to address fears of ‘over-tightening’, which appear to be designed to pacify bond investors and fixed income traders that might think twice about carrying fixed-income exposure in a rising rate environment.

The near-immediate response to yesterday’s FOMC rate decision was a quick pop of USD-strength that lasted for about ten minutes into Chair Yellen’s press conference. As DXY ran into resistance around the 92.50-92.60 area, a range began to show as we moved into the Asian session, with a quick drop coming in around the European open. Does this have the makings of a young bullish trend? It’s still too early to say, but this area of resistance would first need to yield before such a scenario might seem likely. 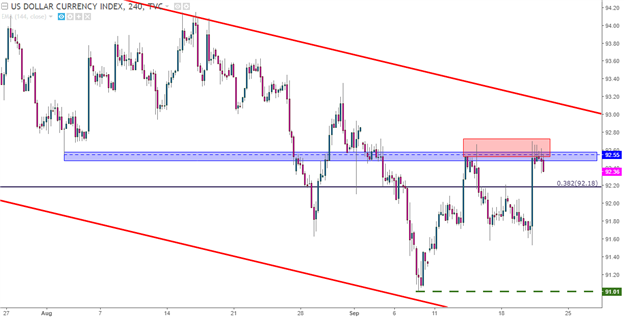 Shortly after the Fed announced their intent to begin trimming the balance sheet in October, the Bank of Japan reiterated their intense dovish stance. This further highlights the deviation amongst large, global Central Banks as we see tightening efforts near or underway in much of the developed world while the Bank of Japan continues with a massive stimulus program. This can also denote continued weakness in the Yen, as the BoJ is one of the few Central Banks that isn’t starting down some type of issue with inflation as growth begins to show a bit more consistently. In Japan, inflation continues to lag well-below the bank’s 2% goal, and despite the fact that those goal posts have been shifted later now six times, the BoJ continues to expect to finally hit that target in the year 2020.

This additional drive of Yen weakness, combined with USD-strength emanating from FOMC helped USD/JPY to move up to test a key resistance zone that runs from 111.61-112.43. 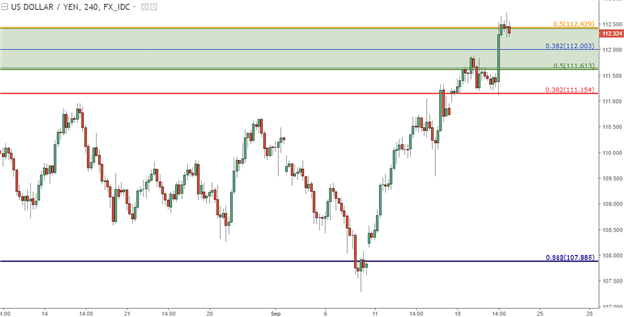 The above two drivers can open the door to a couple of interesting scenarios. For traders that want to fade this recent batch of USD-strength under the anticipation of the longer-term bearish trend continuing, bullish setups in EUR/USD and GBP/USD could be attractive.

We’ve been following a key area of support in Cable that’s held-up well since last week’s BoE meeting. This is the 50% retracement of the ‘Brexit move’ in GBP/USD, and this level at 1.3478 has continued to hold the lows since last week’s bullish breakout. 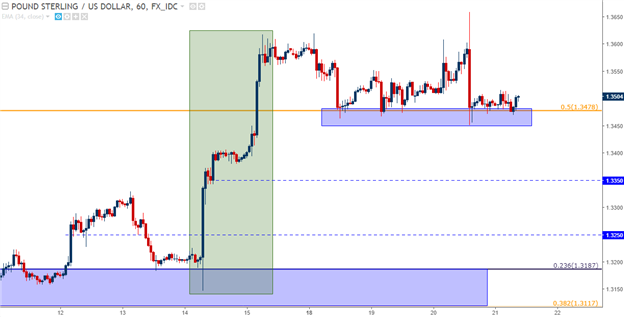 We discussed a short-term range-like formation showing in EUR/USD after the pair failed to take out the 1.2100 level. Yesterday’s quick batch of USD strength brought prices down to the support size of that range, which has, at least so far, held-up with a slightly higher low. This can open the door to bullish setups under the anticipation that new highs may be on the radar. 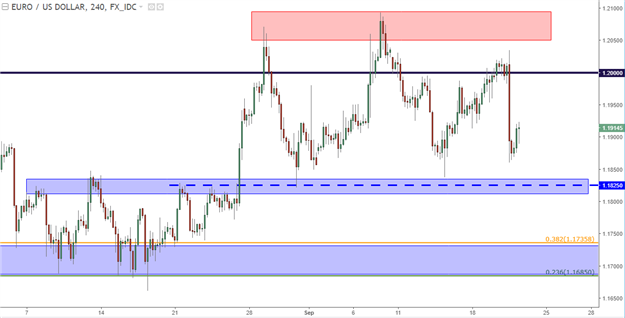 For USD-strength continuation, USD/JPY can remain as attractive. As we looked at above, that resistance zone from 111.61-112.43 is in the process of being tested. This can allow for traders to look for higher-low support if looking to position-in ahead of a potential bullish continuation move. On the chart below, we’re looking at three potential support zones above the prior swing-low. 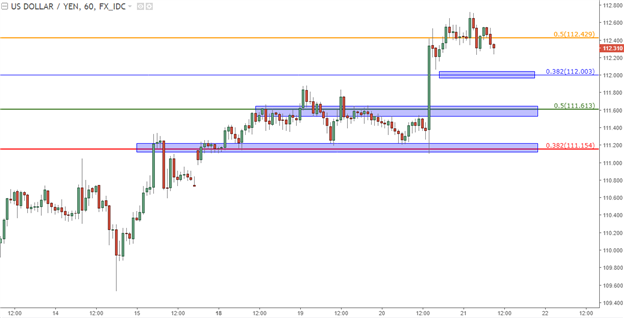