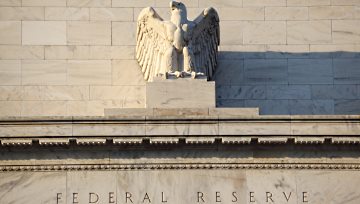 EUR/USD Battles at 1.2000, Cable Bounces Off of Support Ahead of FOMC

- Tomorrow brings an FOMC rate decision where we may see history be made should the bank announce the start of Quantitative Tightening.

- Questions abound about potential repercussions of QT, but the Fed is starting small in a very risk averse format. More interesting, and perhaps more telling for USD price action will be the manner in which markets shape rate expectations relative to tomorrow’s dot plot matrix in consideration of balance sheet reduction ‘running quietly in the background’.

- Sentiment in both EUR/USD and GBP/USD remains elevated, currently showing -2.08 and -2.34, respectively. Given retail sentiment’s traditional contrarian nature, this is bullish for each pair.

Tomorrow brings a rate decision from the Federal Reserve. While there is little expectation for any changes to rates, the prevailing thought is that we’ll hear the bank announce the start of balance sheet reduction, or Quantitative Tightening. This shouldn’t be a surprise, as the Fed has been laying the groundwork for this for much of the year. At the March FOMC meeting, the Fed said that “a change in the Committee’s reinvestment policy would likely be appropriate later this year,” indicating that they would give markets notice well in advance before triggering any such strategy. At subsequent meetings, this topic remained popular, with the Fed continuing to fuel expectations for balance sheet reduction to begin before the end of the year.

Since the topic of balance sheet reduction has entered the discussion, the U.S. Dollar has been pummeled by sellers. And this could make sense if we think of the matter from a perspective of rate expectations. If balance sheet reduction is successful, it should help to lift market interest rates. This could also obviate the need for rate hikes out of the Fed, particularly if inflation in the US remains below the Fed’s 2% target. Given that higher rates are generally the most effective driver of currency prices, the down-trend that we’ve seen in the Dollar this year is likely driven by markets’ expectation for fewer hikes out of the Fed as they begin to tighten the money supply via balance sheet reduction.

As we walk into tomorrow’s Fed meeting, the U.S. Dollar is sitting on a -12.3% drawdown for 2017, with -10.5% of that coming since the day before that March rate hike. The big question is whether the Fed can do anything to reverse this: They’ve been saying for much of the year that they’re anticipating hiking rates while balance sheet reduction ‘runs quietly in the background,’ but this is something that markets are clearly not buying, at least not right now.

This profound move of USD weakness this year has carried some consequences for other currencies. The Euro has spent most of the year in the midst of an aggressive bullish rally. While traders have been selling USD under the expectations for slower rate hikes, we’ve also seen considerable buying of the single currency driven by the expectation for faster rate hikes out of Europe. More recently, we’ve seen this theme begin to develop around the British Pound after last week’s Bank of England rate decision. As the BoE signaled that near-term rate hikes may be in order, traders hurriedly bought GBP in the effort of getting in-front of any potential rate hikes.

Strength in the British Pound continued to run in the immediate wake of that BoE rate decision, with GBP/USD moving above the 1.3600 level after having traded below 1.3200 on the morning of that meeting.

Yesterday saw Mr. Mark Carney, the head of the BoE, deliver a speech for the IMF in Washington D.C., and he indicated that any potential rate hikes would be gradual. The exact line said that interest rates will “rise a limited extent at what can be expected to be a gradual pace, settling at levels significantly below those seen pre-crisis.”

This effectively acted as a buffer for that bullish move, as prices moved-down to test a key support level around 1.3500. The bigger question is whether this retracement has continuation power to become something more than a corrective move. The BoE moved to a more-hawkish stance after the British economy has started to see some rather aggressive inflation, with August prices rising 2.9%. Will ‘limited, gradual’ rate hikes be able to dent this inflation? And if it doesn’t, what is the point of a rate hike? Perhaps more importantly, how can Mr. Carney be so confident that one or two rate hikes will completely take care of the problem so that he and the Bank of England can move back into a dovish stance?

For traders looking at short-USD exposure, the long side of GBP/USD can remain as an attractive option. Current support remains around the 50% retracement of the ‘Brexit move’ in the pair. Subordinated support around 1.3350 and 1.3250 could be used for bullish continuation approaches, and the confluent zone that runs from 1.3117-1.3187 could be an attractive area to look to for risk levels should one of those subordinated support zones come into play. 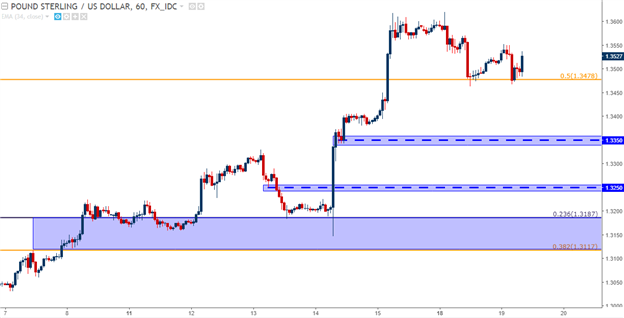 While Cable remains bullish, digestion continues to show in the Euro. The Euro put in a significant bullish move throughout Q3 as markets essentially continued to call Mario Draghi’s bluff. The head of the ECB has been reticent to signal any potential tapering or tightening, for fear of only contributing more to the topside run in the Euro. As growth and inflation have continued to highlight stability within many pockets of the European economy, markets have come to expect the inevitable exit from stimulus at the ECB.

After starting the year below 1.0500, EUR/USD moved all the way up above the 1.2000 level. But life above 1.2000 hasn’t been the same as life below; as the pair has been unable to stage any continuation of advance once prices have traded above this psychological level. On the daily chart below, we can see how one day of price action on September 8th remained above this level, only for prices to fall back-below on the following Monday. 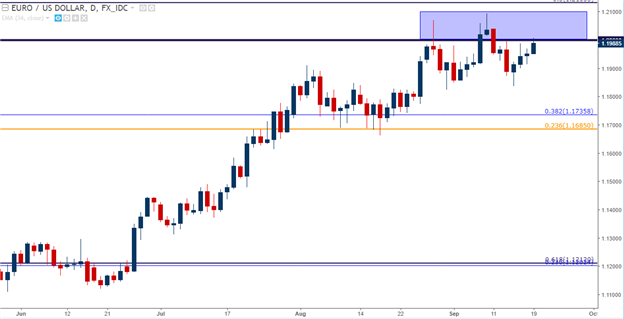 At this stage, we’re seeing another test of the 1.2000 level, but if we move-down to the hourly chart, we can see where a range-like formation has begun to show in the pair throughout September, as prices have put in multiple bounces around both support and resistance. 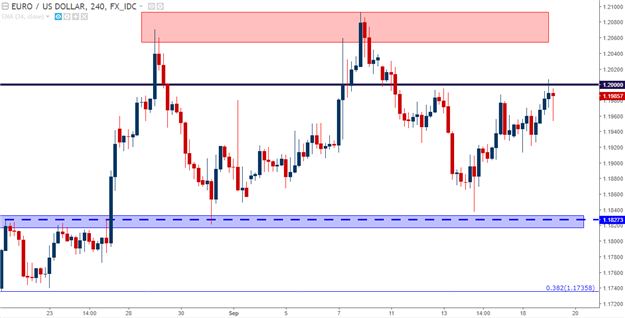 This gives us an approximate 300-pip range with which to work, with support around the 1.1800 handle and resistance just underneath the 1.2100-level. This can be used to signal directional strategies; with bulls only looking to come back to the party if 1.2100 is taken out. If prices do break-below support here, we may see a deeper retracement towards the longer-term confluent zone that runs from 1.1685-1.1736, and this could be attractive for longer-term bullish stances in the pair, if that zone comes into play and finds support.