Chinese, European Banks Feeling the Squeeze on Both Ends

- Banks, despite all of the bad press that they receive, play a critical role in the continued operation of a levered-capitalist economy, as they are the conduits that allow for that leverage to take place.

- Banks are currently seeing pressure on both of their main operating fronts: Lending (as more difficult conditions bring on higher %’s of non-performing loans), and investing as Central Banks look at even more loose monetary policy.

- While many risk assets have continued to rally, many banks remain in vulnerable positions as more loose monetary policy is likely to squeeze these banks even further: Lending to less credit-worthy individuals (risking even higher %’s of non-performing loans) while further complicating their investment environments with even lower rates.

More China Slowdown Signs: We saw yet another disappointing PMI print out of China last night, with Manufacturing PMI coming in at 49-flat v/s an expectation of 49.4, and this is the weakest such print for Chinese production since January of 2009. After last Friday’s mention of having additional room to loosen monetary policy, it was somewhat of a foregone conclusion that some easing was on the way from Beijing. We received that announcement with the RRR-cut yesterday morning. The reduction cut required reserves by .5%, which, in essence, allows Chinese banks to take on more leverage. This is the type of thing that can often provide a short-term boost to the money supply as this is basically a ledger adjustment to allow banks more cash to lend, but longer-term the prospect of even more leverage in China may not be a ‘good’ thing.

As we’ve been discussing, the big problem in China is debt. There is an estimated $34 Trillion of debt for the $11 Trillion economy, and given that many corporates are ‘State-Owned Enterprises,’ this means that the government is on the hook for quite a bit of that debt. One recent estimate pegged 45% of all new loan proceeds as going to pay interest on previously-taken out debt. And with the massive spike in New Yuan loans in January, it would appear that quite a bit of debt is getting re-financed away from Non-Yuan denominations back in to Yuan; and this may be in preparation for the inevitable weakening that many believe to be in the future for China. If you’re holding $10 Million in loans based in USD, and USD/CNH moves up by 10% (Yuan weakens, dollar strengthens), then that Chinese investor owes an equivalent of $11 Million.

But perhaps more disconcerting for China are the non-performing loans that are on these banks’ books. This is a normal cost of doing business for a lender, as there will always be some that don’t pay their debt. Most banks account for this. Official Chinese government statistics say this number is around 1.5%, which is tolerable. But 3rd party estimates peg this number at anywhere between 6-21%, which is pretty unmanageable any way you cut it. As business conditions worsen, banks will see even more non-performing loans. The big worry in the US is that many oil companies will be facing this same fate in the coming months, but for China this has been going on for a while now as data has continued to worsen and as further signs of a deeper slowdown become more and more apparent.

This is why there is such a heavy focus on Chinese data right now: Because it may allude to how aggressively the slowdown is hitting the Chinese economy which may, in-turn, show how much heat Chinese banks will be under in the coming months regarding non-performing loans and Yuan weakness.

On the chart below, we’re looking at the HKG33 representing the Hang Seng index out of Hong Kong, and while there has been some divergence between Hong Kong and the mainland of late, these themes are very much related, as a larger Chinese-slowdown will most certainly impact Hong Kong, and in-turn, we’ve seen these two indices mirror each other’s performance.

Just as China is dealing with right now, banks have a pretty important role in a levered capital system. Banks, after all, are what allow for leverage in an economy to take place. If an average person wants to buy a home or a car that they can’t afford to pay cash for, well they need a bank to get the money and the very act of taking out a mortgage or a car loan is leverage.

But this capital isn’t created out of thin air, right? The bank has to take deposits from other customers (or money that they’ve borrowed from other banks) to allow you to borrow the funds in the first place. Then you pay interest to your bank, they pay interest to the deposit holders that they borrowed money from (or the other banks that they borrowed from), and they pocket the difference.

This is a pretty good business if you can get into it, but there are some pretty large barriers to entry. But it’s the essence of this ‘spread’ that makes being a bank so utterly attractive. You can borrow money at a lower rate and then lend it at a higher rate, and as long as people keep paying back their loans, you’re good.

Operating as a traditional bank is really just setting up one big portfolio of carry trades.

But when someone doesn’t pay their loan, the bank has to go into their ‘spread proceeds’ to cover the loss. This is why banks are traditionally so risk-averse, because they don’t want to do that. But when a systemic problem hits an economy, there isn’t much that can be done. This is just like we saw in 2008 in the United States when people stopped paying their mortgages: This locked up so much capital that not only were banks forced to take losses on the lost interest payments, but they ended up choking on the principal as the debt went ‘bad,’ when people stopped paying their mortgages. The Federal Reserve had to step in to replace that toxic debt with ‘fresh capital’ in three different rounds of Quantitative Easing (and one round of ‘Operation Twist’).

This is the same type of thing that’s going on in China right now as the world tries to figure out what the real rate of non-performing loans might be in the economy, and the fear is that Europe is on the cusp of a full-blown banking crisis.

Many of these European banks have seen treacherous financial conditions over the past five years, and with the European Central Bank having moved to negative rates, they’re really starting to show the pinch. These banks have had ‘extraordinarily-accommodative’ policy for some time now. And given that their primary business is to lend money in order to pocket the spread, it reasons to believe that they would’ve loaned money to as many credit worth individuals as they could find over the past 2+ years.

But with the ECB moving even deeper into negative rates, this only compels banks to take on even more credit risk by loaning money to people that, otherwise, wouldn’t have been considered credit-worthy. And if the bank doesn’t want to loan money to those folks, well now they’re going to get charged by keeping excess reserves on deposit at the Central Bank.

So, with Central Banks moving to negative rates and pinching banks on excess reserves as non-performing loans rise in response to a global slowdown, banks are getting hit from both sides. European banks look the most vulnerable at the moment, and you can watch any of the ‘big banks’ ticker symbols to see this playing out right now. One big source of worry at the moment is Deutsche Bank, as they hold over $70 Trillion of derivative exposure (that is trillion with a ‘T’). Below is the current chart on DB. 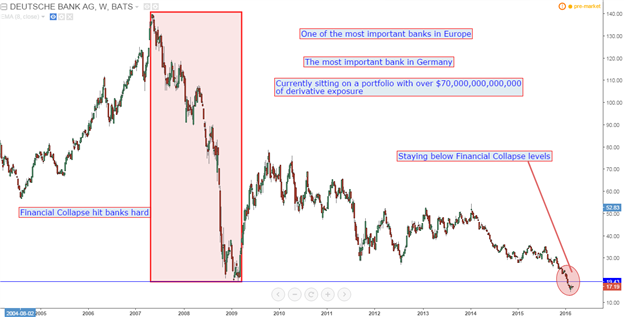 Unfortunately, this problem isn’t relegated to just one bank in one European economy. Just last month we wrote that Italian Banks are screaming warning signs to the EU and ECB, and matters haven’t really improved for Italian banks since. This is all over continent. And as we’re now seeing weakness in even the previously strong areas of the European economy (Germany), these risks have become even more concerning as it’s likely that we’ll see an increase in non-performing loans while European banks continue to feel the squeeze with negative rates from the Central Bank.

On the chart below, we’re looking at the ticker of ‘EUFN,’ which is an American ETF designed to mirror performance in European Banks. And while many risk assets around the world are showing some signs of recovery, price action in this market continues to dwindle near support. 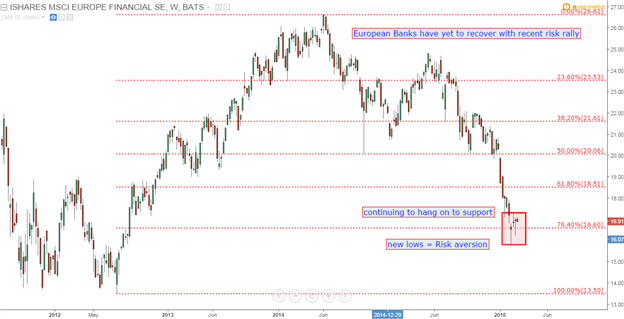 This highlights that risk aversion likely isn’t over, because even if it were, banks are in a precarious position that likely can’t be solved with currently available tools. Banks are getting hit from both sides: A slowing economy that usually brings higher percentages of non-performing loans along with Central Banks that are squeezing their investing activities by moving to (or deeper with) negative rates.