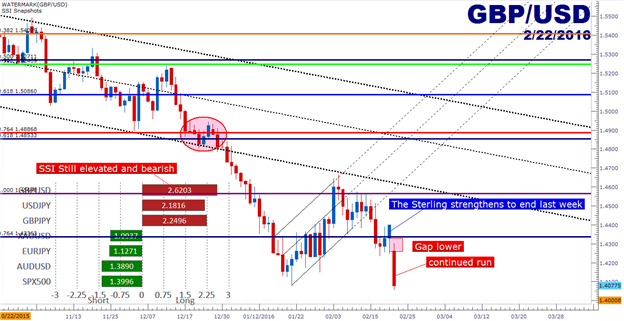 Brexit Fears Sink the Pound, and Stocks Continue to Rally

- Late-minute reports of a deal between Mr. Cameron and EU leadership gave a quick pop to the Pound to close out last week, but the Mayor of London advocating for a Brexit have wiped away all of those gains and then some. Sterling remains heavily offered.

- Global stocks are continuing to hold on to gains from last week, with the S&P 500 approaching a critical resistance level in the 1,950 area.

- Volatility this week will likely remain elevated; risk management needs to be addressed before traversing in such conditions. Click here to get our Traits of Successful Traders research.

Hope reigned eternal, or for at least for about 50 minutes, when reports began to circulate of a deal being struck between Mr. Cameron and the political contingent representing Europe at dinner late on Friday night. This news first hit at 4:09 Eastern Time with a tweet from the President of Lithuania with approximately 51 minutes left until the end of trading for the week. The Sterling put in a strong rally all the way up to 1.4400 against the US Dollar, and it looked like Brexit fears, at least temporarily, may have been averted.

But it’s the people of the United Kingdom that will actually decide on a Brexit. This actually goes back to 2013, in which Mr. Cameron said that he would hold a referendum on continued EU membership should conservatives take a majority in parliament. Well, conservatives took parliament and two years later Mr. Cameron reiterated this promise with the assurance that a vote would be held before the end of 2017. The negotiations that were taking place up until last Friday were Mr. Cameron negotiating with European leadership for a better set of terms for the UK’s continued membership. Key of which is migration.

The deal struck on Friday is just a slightly improved set of terms that Mr. Cameron can take to British voters, and upon first news it appeared as though this enhanced set of terms might allow for Mr. Cameron to lobby for a ‘yes’ vote to continued membership.

But over the weekend, Mr. Boris Johnson, the popular conservative Mayor of London said that he would campaign for a ‘no’ vote; attempting to draw votes towards a Brexit. This highlights not only the fragility of the deal struck between Mr. Cameron and the EU, but the growing sentiment and conservativism within the British population. The Sterling has since been crushed. After closing last week at 1.4398, we opened up this week at 1.4260 and haven’t really seen much recovery. The sterling has continued to slide lower, and we’ve seen ~190 pips shed since that opening gap last night.

Stocks are rallying to open the week: Asia opened up to gains and held throughout the session, and Europe continued the bullishness and US futures are pointing to a higher open as well. We’re nearing some very important levels on the S&P 500. The 1,950 area had capped the swing high in January before the February selling re-triggered slowdown fears, and there are also two widely-followed Fibonacci retracements within a few handles. We have the 38.2% retracement of the move from last year, taking the 2,137.10 top to the 1,833.50 low set on ‘China’s Black Monday,’ of August 24th. We also have the 50% retracement of the 12/29 high at 2,082.10 to the January low set at 1,810.9, and this was also the top of the most recent major move that set a new low just a little over a week ago.

So price action in this vicinity could be telling for moves later in the week. If prices aren’t able to break through with conviction, traders can look for a return of the down-trend. If price action does break above, and then catch support on this area of potential resistance, then traders can begin looking at the potential for further gains.

There is considerable US Data to be released this week, and this could very much shape risk tonality. We get consumer confidence on Tuesday and GDP on Thursday, and we may see more of the ‘bad is good’ conundrum, in which bad US data points to lower probabilities of further rate hikes out of the US, which would be a positive for risk assets. Whereas good data may point to more rate hikes than what the market is expecting right now (which is none for 2016), and this could be risk-negative.