Updates to the U.K. Employment report may produce headwinds for the British Pound as the figures are anticipated to show a slowdown in both job and wage growth.

The U.K. economy is anticipated to add 141K jobs in the three-months to March following the 179K expansion during the previous period, while Average Weekly Earnings are expected to slow to 3.4% from 3.5% per annum in February.

Signs of a less robust labor market may spark a bearish reaction in GBP/USD as it encourages the Bank of England (BoE) to retain a wait-and-see approach for monetary policy, and the central bank may merely attempt to buy more time at the next meeting on June 20 as the Monetary Policy Committee (MPC) insists that ‘U.K. data could be unusually volatile in the near term, due to shifting expectations about Brexit in financial markets and among households and businesses.’

In turn, a slowdown in both job and wage growth may drag on the British Pound, but a batch of above-forecast data prints may trigger a rebound in GBP/USD as it put pressure on Governor Mark Carney & Co. to further normalize monetary policy in 2019.

Impact that the U.K. Employment report had on GBP/USD during the last print

U.K. Employment increased 179K during the three-months through February after expanding 222K the month prior, while the Unemployment Rate held steady at 3.9% per annum for the second month. A deeper look at the report showed Average Weekly Earnings also holding steady at 3.5% during the same period following an upward revision for January, while Jobless Claims climbed another 28.3K in March after increasing a revised 26.7K the month prior.

The mixed figures generated a limited reaction in GBP/USD, but the British Pound struggled to hold its ground during the North American trade, with the exchange rate slipping 1.3050 region to close the day at 1.3045. Learn more with the DailyFX Advanced Guide for Trading the News. 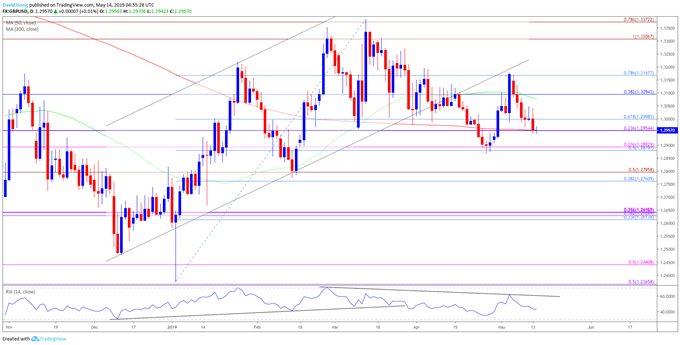