The Reserve Bank of Australia (RBA) interest rate decision may trigger increased volatility in the AUD/USD exchange rate amid speculation for a 25bp rate-cut.

It remains to be seen if the RBA will reduce the official cash rate (OCR) ahead of the Federal election on May 18 as Governor Philip Lowe & Co. argue ‘a lower level of interest rates could still be expected to support the economy through a depreciation of the exchange rate and by reducing required interest payments on borrowing, freeing up cash for other expenditure.’

In turn, a 25bp rate-cut along with a material change in the forward-guidance for monetary policy is likely to produce headwinds for the Australian dollar, but more of the same from the RBA may fuel a larger rebound in AUD/USD as market participants scale back bets for lower interest rates.

The Reserve Bank of Australia (RBA) kept the official cash rate (OCR) at the record-low of 1.50% in April, with the central bank still endorsing a wait-and-see approach for monetary policy as ‘growth in household consumption is being affected by the protracted period of weakness in real household disposable income and the adjustment in housing markets.’ The remarks suggest the RBA is in no rush to alter the forward-guidance as the‘low level of interest rates is continuing to support the Australian economy,’ and it seems as though the central bank will stick to the sidelines ahead of the upcoming elections in May as Governor Philip Lowe & Co. pledge to ‘monitor developments and set monetary policy to support sustainable growth in the economy and achieve the inflation target over time.’

More of the same from the RBA dragged on the Australian dollar, with AUD/USD slipping below the 0.7100 handle to close the day at 0.7071. Learn more with the DailyFX Advanced Guide for Trading the News. 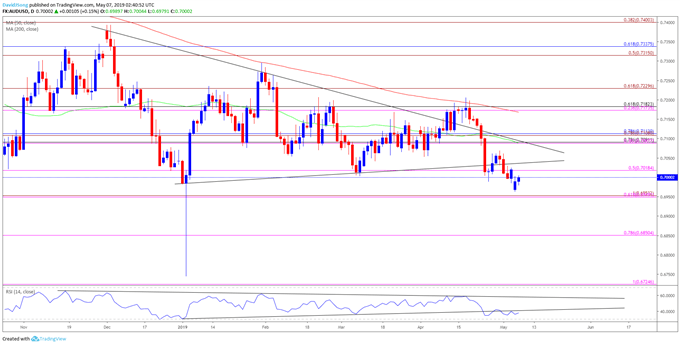