The Bank of Canada (BoC) interest rate decision may fuel the recent advance in USD/CAD as the central bank is widely anticipated to keep the benchmark interest rate at 1.75% in April.

At the same time, the updates to the BoC’s Monetary Policy Report (MPR) may shake up the near-term outlook for the Canadian dollar as Governor Stephen Poloz & Co. warn that ‘the economy will be weaker in the first half of 2019 than the Bank projected in January,’ and the central bank may show a greater willingness to abandon the hiking-cycle as ‘it will take time to gauge the persistence of below-potential growth and the implications for the inflation outlook.’

With that said, the BoC may continue to alter the forward-guidance for monetary policy as ‘trade tensions and uncertainty are weighing heavily on confidence and economic activity,’ and a batch of dovish comments may spark a bearish reaction in the Canadian dollar as market participants scale back bets for higher interest rates.

However, Governor Poloz & Co. may merely attempt to buy more time as ‘core inflation measures remain close to 2 per cent,’ and more of the same from the BoC may curb the recent advance in USD/CAD as the central bank remains reluctant to abandon the hiking-cycle. Sign up and join DailyFX Currency Analyst David Song LIVE for an opportunity to discuss potential trade setups.

As expected, the Bank of Canada (BoC) kept the benchmark interest rate at 1.75% in March, with the central bank largely endorsing a wait-and-see approach for monetary policy as the ‘Governing Council judges that the outlook continues to warrant a policy interest rate that is below its neutral range.’ The fresh remarks suggest Governor Stephen Poloz & Co are in no rush to implement higher rates as ‘recent data suggest that the slowdown in the global economy has been more pronounced and widespread than the Bank had forecast in its January Monetary Policy Report (MPR).’

The Canadian dollar struggled to hold its ground following the BoC meeting, with USD/CAD climbing above the 1.3400 handle to close the day at 1.3442. Review the DailyFX Advanced Guide for Trading the News to learn our 8 step strategy. 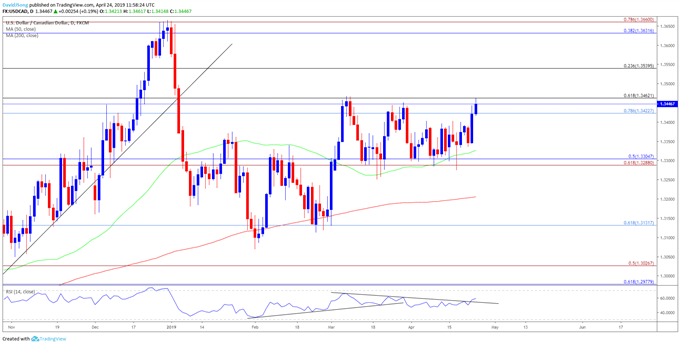