Updates to the U.S. Consumer Price Index (CPI) may keep EUR/USD afloat as the headline reading is projected to slow to 2.2% from 2.5% per annum in October, while the core rate is expected to climb to 2.2% from 2.1% during the same period.

A batch of mixed data prints may produce headwinds for the U.S. dollar as it encourages the Federal Reserve to deliver a dovish rate-hike at its last meeting for 2018, and the central bank may start to endorse a less-hawkish forward-guidance for monetary policy as ‘participants viewed recent price developments as consistent with their expectation that inflation would remain near the Committee's symmetric 2 percent objective on a sustained basis.’

In turn, the updated figures may encourage the Fed to adopt a greater tolerance to above-target inflation, and signs of limited price growth may ultimately sap the appeal of the greenback as the Federal Open Market Committee (FOMC) appears to be on track to conclude its hiking-cycle in 2019.

Nevertheless, an unexpected pickup in both the headline and core CPI may put pressure on Chairman Jerome Powell & Co. to implement higher borrowing-costs over the coming months, with signs of stronger inflation likely to spark a bullish reaction in the U.S. dollar as it boosts speculation for above-neutral interest rates. Sign up and join DailyFX Currency Analyst David Song LIVE for an opportunity to discuss potential trade setups.

The U.S. Consumer Price Index (CPI) bounced back in October, with the headline reading widening to 2.5% from 2.3% per annum in September, while the core rate unexpectedly narrowed to 2.1% from 2.2% during the same period. A deeper look at the report showed prices for apparel increasing 0.1% after expanding 0.9% in September, with the cost for food narrowing 0.1% during the same period, while transportation costs increased 1.1% on the back of higher energy prices.

The lackluster data prints failed to produce a meaningful reaction, with quickly climbing back above the 1.1300 handle to end the day at 1.1307. Review the DailyFX Advanced Guide for Trading the News to learn our 8 step strategy. 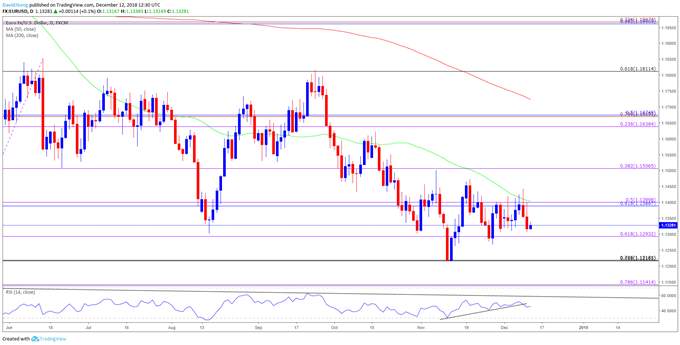