The Federal Open Market Committee (FOMC) interest rate decision may yield a limited reaction as the central bank is widely expected to keep the benchmark interest rate in its current threshold of 2.00% to 2.25%.

The Federal Reserve may stick to the current script and refrain from altering the monetary policy outlook amid mixed data prints coming out of the U.S. economy, and more of the same from the central bank may drag on the dollar especially as the outcome of the mid-term elections cloud the outlook for fiscal policy.

However, the FOMC appears to have little to no interest from deviating from its hiking-cycle as ‘the Committee expects that further gradual increases in the target range for the federal funds rate will be consistent with sustained expansion of economic activity, strong labor market conditions, and inflation near the Committee's symmetric 2 percent objective over the medium term,’ and fresh remarks from Chairman Jerome Powell & Co. may spark a bullish reaction in the greenback should central bank officials prepare U.S. households and businesses for an imminent rate-hike and warn of above-neutral interest rates. Sign up and join DailyFX Currency Analyst David Song LIVE for an opportunity to discuss potential trade setups.

The Federal Reserve delivered another 25bp in September to push the benchmark interest rate to a fresh threshold of 2.00% to 2.25%, and the central bank appears to be on track to further normalize monetary policy over the coming months as ‘risks to the economic outlook appear roughly balanced.’ It seems as though the Fed has little to no intentions of deviating from its hiking-cycle as ‘both overall inflation and inflation for items other than food and energy remain near 2 percent,’ and the central bank may continue to strike a hawkish forward-guidance for monetary policy as the economy sits at full-employment.

The initial spike in EUR/USD was short-lived, with the exchange rate quickly pulling back from a high of 1.1798 to close the day at 1.1737. Review the DailyFX Advanced Guide for Trading the News to learn our 8 step strategy. 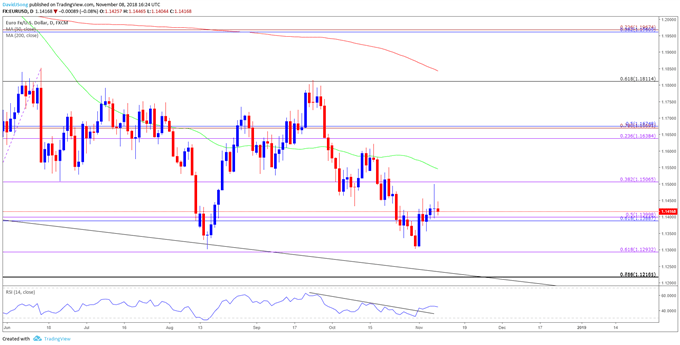