Updates to New Zealand’s Employment report may spur a rebound in NZD/USD as job growth is expected to increase 3.6% per annum in the second-quarter of 2018 versus the 3.1% expansion during the first three-months of the year.

Signs of a stronger labor market may put pressure on the Reserve Bank of New Zealand (RBNZ)to alter the forward-guidance for monetary policy at the next meeting on August 8, and Governor Adrian Orr & Co. may start to change their tune later this year as ‘ongoing spending and investment, by both households and government, is expected to support growth.’

In turn, a positive development may spark a bullish reaction in the New Zealand dollar as it encourages the RBNZ to lift the official cash rate (OCR) off of the record-low, but a set of below-forecast prints may fuel the recent weakness in NZD/USD as it casts a weakened outlook for the economy. Sign up and join DailyFX Currency Analyst David Song LIVE for a broader discussion on current themes and potential trade setups!

New Zealand employment increased 3.1% per annum in the first-quarter of 2018, which compares to the 3.7% expansion during the last three-months of 2017, while the jobless rate narrow to 4.4% from 4.5% during the same period as the Participation Rate unexpectedly slipped to 70.8% from a revised 70.9%. A deeper look at the report showed Average Hourly Earnings increasing 1.1% versus projections for a 0.5% print, and the mixed data prints may do little to alter the monetary policy outlook as the Reserve Bank of New Zealand (RBNZ) remains in no rush to lift the official cash rate (OCR) off of the record-low.

The New Zealand dollar struggled to hold its ground following the lackluster print, with NZD/USD pulling back from the 0.7340 region to close the day at 0.7271. Learn more with the DailyFX Advanced Guide for Trading the News. 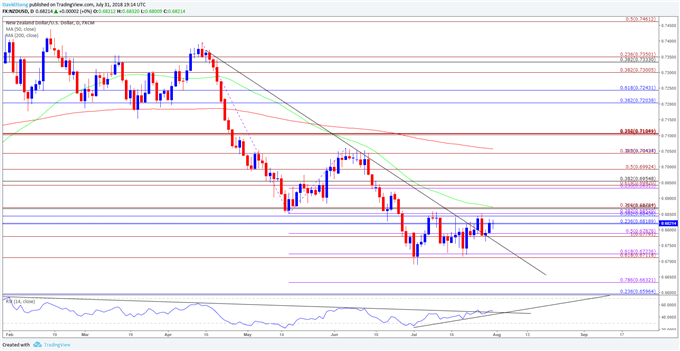