More of the same from the Reserve Bank of New Zealand (RBNZ) may generate fresh yearly lows in NZD/USD as the central bank keeps the official cash rate (OCR) at the record-low and remains reluctant to normalize monetary policy.

The RBNZ seems reluctant to alter the forward guidance as inflation continues to run below the 2% target, and the central bank may keep the door open to further support the New Zealand economy especially as the growth rate slows to an annualized 2.7% from 2.9% in the last three-months of 2017. In turn, a batch of cautious comments may fuel the bearish behavior in NZD/USD as it saps bets for a rate-hike in 2018.

However, an unexpected change in the forward guidance for monetary policy may curb the recent weakness in NZD/USD, with the pair at risk for a near-term recovery should Governor Arian Orr & Co. show a greater willingness to lift the cash rate off of the record-low. Sign up and join DailyFX Currency Analyst David Song LIVE for a broader discussion on current themes and potential trade setups!

The Reserve Bank of New Zealand (RBNZ) kept the official cash rate (OCR) at the record-low of .175% in May, and it seems as though the central bank remains in no rush to alter the monetary policy outlook as Governor Orr argues that ‘the direction of our next move is equally balanced, up or down.’ Even though the ‘recent growth in demand has been delivered by an unprecedented increase in employment,’ it seems as though the RBNZ will stick to the wait-and-see approach in 2018 as ‘the emerging capacity constraints are projected to see New Zealand’s consumer price inflation gradually rise to our 2 percent annual target.’

The New Zealand dollar struggled to hold its ground following the dovish comments, with NZD/USD pulling back from the 0.6980 region to close the day at 0.6962. Learn more with the DailyFX Advanced Guide for Trading the News. 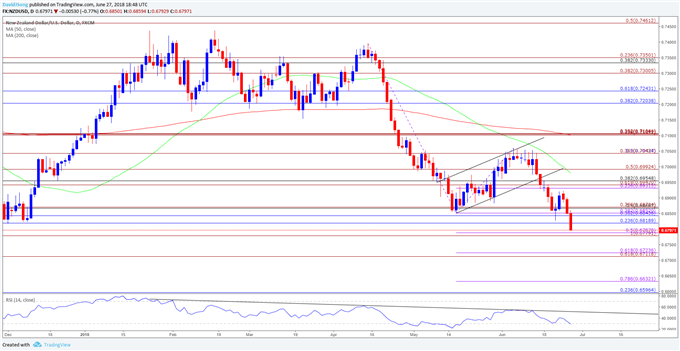