- Reserve Bank of Australia (RBA) to Hold Cash Rate at Record-Low of 1.50%. Will Governor Philip Lowe and Co. Continue to Tame Bets for a Rate-Hike in 2018?

The Reserve Bank of Australia (RBA) interest rate decision may keep AUD/USD under pressure as the central bank remains in no rush to lift the cash rate off of the record-low.

The RBA may stick to the current script as ‘inflation remains low, with both CPI and underlying inflation running a little below 2 per cent,’ and the central bank may merely attempt to buy more time as ‘household incomes are growing slowly and debt levels are high.’ As a result, more of the same from Governor Philip Lowe & Co. may instill a bearish outlook for the local currency as its dampens bets for a rate-hike in 2018.

At the same time, an unexpected shift in the monetary policy outlook may heighten the appeal of the Australian dollar as market participants prepare a for higher borrowing-costs, and a batch of hawkish rhetoric may trigger a bullish reaction in AUD/USD as the central bank prepares to normalize monetary policy.

The Reserve Bank of Australia (RBA) kept the cash rate at the record-low of 1.50% in February, with the central bank largely endorsing a wait-and-see approach for monetary policy as ‘inflation is likely to remain low for some time, reflecting low growth in labour costs and strong competition in retailing.’ The policy statement suggests the RBA will stick to the sidelines throughout the first-half of the year as ‘the low level of interest rates is continuing to support the Australian economy,’ and Governor Philip Lowe and Co. may continue to tame expectations for a rate-hike as ‘an appreciating exchange rate would be expected to result in a slower pick-up in economic activity and inflation than currently forecast.’

The Australian dollar struggled to hold its ground following the rate decision, with AUD/USD pulling back from the 0.7790 region, but the move was short-lived as the pair ended the day at 0.7828. Want More Insight? Sign up and join DailyFX Market Analyst David Cottle LIVE to cover the RBA rate decision. 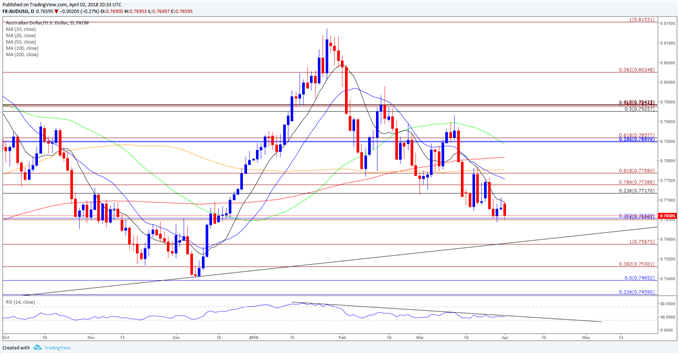