- Will Fed Officials Prepare Households & Businesses for a March Rate-Hike?

The Federal Open Market Committee’s (FOMC) first interest rate decision for 2018 may generate a limited reaction as Chair Janet Yellen and Co. are expected to retain the current policy, but the fresh batch of central bank rhetoric may heighten the appeal of the greenback should Fed officials show a greater willingness to lift the benchmark interest rate over the coming months. 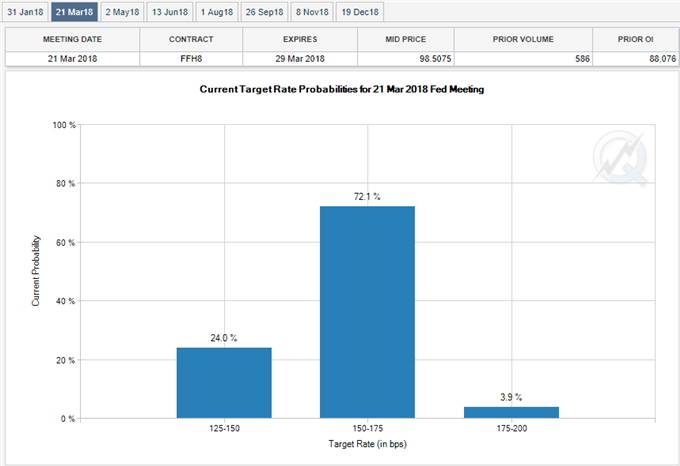 With Fed Fund Futures still highlighting a greater than 70% probability for a move at the March meeting, the committee may utilize Chair Yellen’s last meeting to prepare U.S. households and businesses for an imminent rate-hike as ‘many indicated that they expected cyclical pressures associated with a tightening labor market to show through to higher inflation over the medium term.

In turn, a hawkish policy statement may rattle the near-term rally in EUR/USD, but more of the same from the FOMC may keep the euro-dollar exchange rate afloat as market participants scale back bets for three Fed rate-hikes in 2018. New to trading? Review the ‘Traits of a Successful Trader’ series on how to effectively use leverage along with other best practices that any trader can follow.

As expected, the Federal Open Market Committee (FOMC) delivered a 25bp rate-hike at its last meeting for 2017 to lift the benchmark interest rate to a fresh threshold of 1.25% to 1.50%. At the same time, the fresh forecasts from Fed officials suggest the central bank will also implement three rate-hikes in 2018 as ‘the Committee expects that economic conditions will evolve in a manner that will warrant gradual increases in the federal funds rate,’ while the longer-fun forecast was largely unchanged amid projections for a terminal rate around 2.75% to 3.00%.

The U.S. dollar struggled to hold its ground as the FOMC tamed bets for a series of rate-hikes, with EUR/USD climbing above the 1.1800 handle to end the day at 1.1826. For additional resources, download and review the FREE DailyFX Advanced Guide for Trading the News to learn our 8 step strategy. 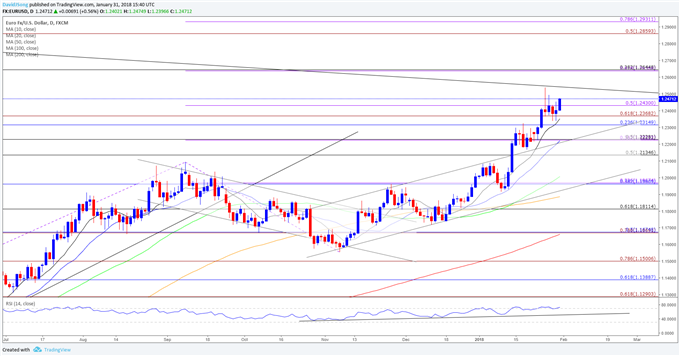