- Core Rate of Inflation to Increase 1.9% per Annum.

Updates to Australia’s Consumer Price Index (CPI) may spark a bullish reaction in AUD/USD as the headline and core reading for inflation are expected to pick up during the last three-months of 2017.

Signs of stronger price growth is likely to heighten the appeal of the Australian dollar as it put pressure on the Reserve Bank of Australia (RBA) to lift the cash rate off of the record-low, and Governor Philip Lowe & Co. may start to alter the monetary policy outlook as the central bank head warns that ‘it is more likely that the next move in interest rates will be up, rather than down.’

In turn, a positive development may encourage the RBA to adopt a hawkish tone at the next meeting on February 6, but a string of below-forecast prints may fuel the near-term weakness in AUD/USD as market participants scale back bets for an RBA rate-hike in 2018. Interested in watching the market reaction? Sign up & join DailyFX Currency Strategist Ilya Spivak LIVE to cover the Australia CPI print.

Australia’s Consumer Price Index (CPI) unexpectedly slowed to an annualized 1.8% from 1.9% in the second-quarter of 2017, while the core rate of inflation held steady 1.8% amid forecasts for 2.0% print. A deeper look at the report showed prices for non-tradeable goods climbing 3.2% per annum during the three-months through September, while the cost for tradeable goods fell 0.9% during the same period.

The Australian dollar struggled to hold its ground following the below-forecast print, with AUD/USD slipping below the 0.7750 region to end the day at 0.7703. New to trading? Review the ‘Traits of a Successful Trader’ series on how to effectively use leverage along with other best practices that any trader can follow. 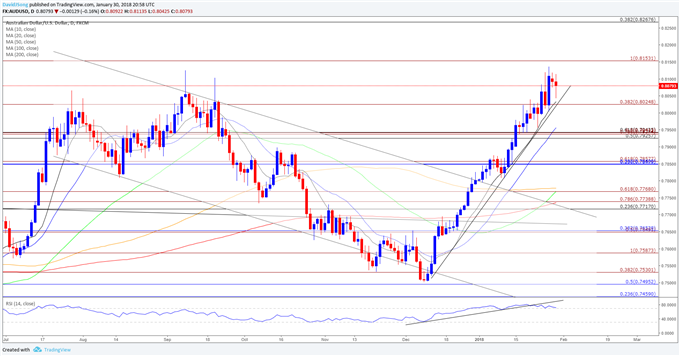